The Creeper: The Haunting of Bly Manor

Otherwise known as The Haunting of Hill House Season 2, this new anthology show—once again conceived and directed by Mike Flanagan—arrives on Netflix this week. Flanagan takes a cue from Ryan Murphy, in the sense that he reestablishes the Haunting series as an anthology akin to American Horror Story: the same performers appear in Season 2 playing new characters, and involved in a new but still creepy plot. Bly Manor borrows from the work of Henry James, and at nine hours long, millage may vary. That said, the show does feature a standout performance by queer actress T’Nia Miller of Years & Years fame, who again proves herself a very compelling—not to mention strikingly beautiful—performer. Here’s hoping Season 3 features her in a leading role.

NBC joins the ranks of socially distant TV production with this new sitcom about a group of friends meeting up via Zoom each week during the COVID-19 pandemic. Given the show’s odd format of performers talking at one another through split-screen cameras, Connecting shouldn’t work as well as it does. That owes much to the performers, especially transgender actress Shakina Nayfack (Transparent) in a leading role as Ellis, a beer-swilling, basketball-loving Angelino and easily the most compelling (and fun) character on the show. Actor Parvesh Cheena (Crazy Ex-Girlfriend) is also fun as Pradeep, a gay dad so sick of his husband and kids he’ll hide anywhere in the house he can to avoid them. We’re not sure how Connecting will fare once the coronavirus shut down lifts, though we have a feeling Nayfack’s name will crop up again in the future. She’s an actress to watch, which is lucky: we sure enjoy watching her.

Director Quentin Lee may officially be the most prolific director working through the pandemic, first with his comedy special Brash Boys Club, and with the webcam-filmed thriller Comisery. Now Lee takes on comedy with the new sit-com Boy Luck Club about a group of self-described Gaysian men meeting up online during lockdown. As with everything filmed via Zoom, the show has the occasional awkward moment of claustrophobia given the fixed scenery. Still, the cast has a genuine rapport with one another, and seeing an all-Asian, largely queer cast is always a joy.

The anticipated new album by Drag Race star Peppermint arrives this week, finding the queen crooning out a ten-track mix of spoken word, soulful ballads and pop with a show tune flare. As with all things Peppermint, we expected an album rife with glamour and fabulousness, and A Girl Like Me has both for sure. What we didn’t expect, however, is just how personal and introspective Peppermint gets in her music—something lacking in most pop songs today. That includes an emotional cover of The Shirelles’ “Will You Still Love Me Tomorrow,” showcasing both Peppermint’s vocal and emotional range.

The Cheery: Seth Sikes “What More Do I Need”

Broadway and cabaret crooner Seth Sikes just dropped his newest video this week, an ode to New York as told through the music of Stephen Sondheim. The video finds the ever-cheerful (and occasionally shirtless) Sikes parading around the streets of New York City, mask and hand sanitizer in hand, celebrating the final days of summer before the ice buries the Big Apple once again. Sikes is his usual optimistic self, though it’s hard not to feel a tinge of sadness considering how the pandemic has muffled some of the most beloved elements of the city. That includes Broadway shows, of course, which Sikes seems to lobby for roles in every time he releases a new video.

The Bonus: Sally on a Hot Tin Roof

The Sip: The Pride 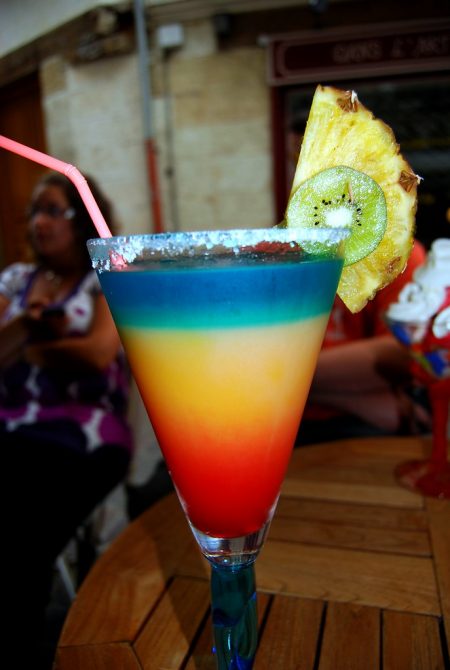 In honor of National Coming Out Day this week, we suggest this cocktail which announces Pride with an array of bright, layered colors. Fruity and very potent, it should offer enough liquid courage to come out…or just hit up a few boys on the apps.

Pour in a tall glass over ice. Use a spoon to carefully layer each ingredient.