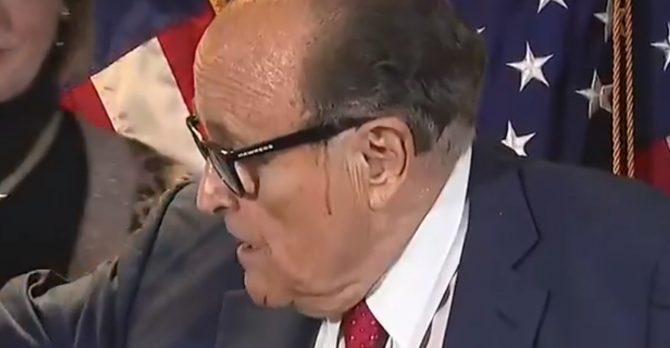 Republican nutbag and Trump attorney Rudy Giuliani stepped in front of the microphone this morning to more false allegations of voter fraud in the 2020 Election. In addition to spreading false information, Giuliani also had a spectacular on-stage meltdown–quite literally.

It appears that Rudy Giuliani is sweating through his hair dye. pic.twitter.com/OY3dGL1BtX

During the conference, Giuliani launched into quotes from the film My Cousin Vinny, which he described as “one of my favorite law movies.” While quoting the film, Giuliani began to sweat profusely. Colored threads began to run down his face as the sweat prompted his make-up and possibly hair dye to melt.

Giuliani and company are about to give us a Total overview of the Landscaping pic.twitter.com/bM4223t14u

Amid his literal melting, Guiliani presented already-debunked claims of voter fraud in Georgia, Pennsylvania, Michigan, Wisconsin, Nevada and Arizona. He also asserted that all the voter fraud occurred in Democratic-leaning cities and districts, a coded dig at voters of color. Giuliani also stated that his hope is for a court to overturn the election, which Democrat Joe Biden won.

Related: Rudy Giuliani loses his sh*t when a FOX anchor dares to question him on reality

At the time of this writing, various courts have thrown out more than a dozen lawsuits concerning voter fraud, all of which have been declared baseless. Bipartisan election officials in 45 states have said there is no evidence of any voter fraud. The Republican Georgia Secretary of State, Brad Raffensperger, has also said he was pressured into voiding ballots by Senator Lindsay Graham.

Memo to Rudy: You’re no Joe Pesci. You’re also no Baby Jane…though we do see the resemblance.