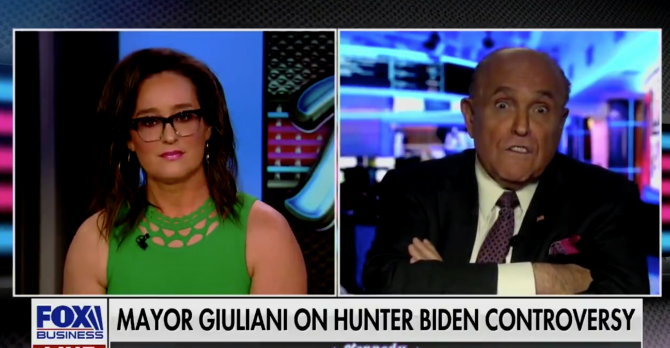 Trump lawyer and worst surrogate ever Rudy Giuliani looked like he needed oxygen after FOX Business host Lisa Kennedy likened his debunked Hunter Biden “laptop from hell” hail Mary to the arguably less-sketchy Trump dossier drafted by Christopher Steele, which the right has long targeted as a hoax.

“We will have the people in our news departments verify all of this, because it sounds like there may be something here that is fishy that is causing Americans — giving them pause, and now there’s stuff that might’ve been completely adulterated over the 18 months,” she said, “and some could say that you were acting like Christopher Steele, that you were abstracting information.”

Rudy Giuliani blows up a Fox Business interview after Lisa Kennedy says people could say he's acting like Trump dossier author Christopher Steele with the Hunter Biden laptop materials: "You better apologize for that … I think our interview is now over" pic.twitter.com/OsIGZ42y1r

Giuliani was aghast. “You’ve got to be kidding me. I was acting like Christopher Steele?!” he asked. “You better apologize for that.”

“I’m accusing you of acting in a capacity similar to Christopher Steele, and that you were going back and forth between Ukraine and the United States,” clarified Kennedy.

Giuliani nearly popped. “Similar to a crook? What you are saying is an outrageous defamation of me, of my reputation! Every single thing is here! And I want you to look at it, and then you apologize to me! I came on your show in good faith to give you evidence that has been withheld from the American people. And I get defamed. That is outrageous! I think our interview is now over. I don’t talk to people who accuse me…This may be the last time we’ll be on camera, ’cause I don’t let people call me Christopher Steele, I’m sorry. Christopher Steele is a criminal! You’re asserting that I’m a criminal!”

It’s got to be tough to maintain this level of lunacy this late in the game, even for Rudy.

And that was before Kennedy even asked him about that Borat scene.