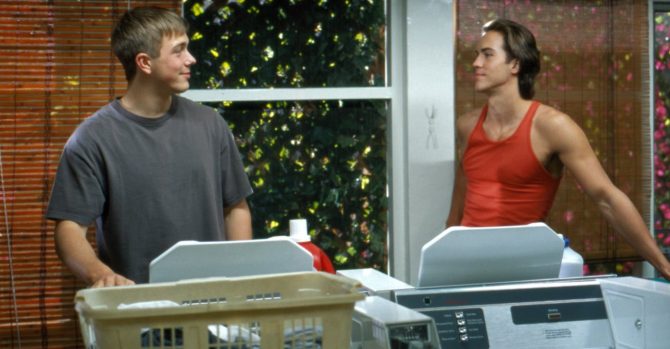 This 2003 comedy found an immediate cult following on release for its love story between a West Hollywood circuit boy and a Mormon missionary. We have a feeling that has more to do with the premise than the quality of the final film. Let’s face it, some guys have a Mormon fetish. Latter Days indulges that.

Wes Ramsey plays Christian, the aforementioned party boy who falls hard for his new Mormon neighbor, Aaron (Steve Sandvoss). The film follows a fairly boilerplate story from there on, with the sexual tension mounting, and Aaron predictably having to choose between his homophobic Mormon faith, and his newfound passion for Christian. Latter Days also deserves recognition as one of the first queer films to deal with the subject of conversion therapy. Those scenes, while nowhere near as brutal as those in later films such as Boy Erased or The Miseducation of Cameron Post, do pack a strong emotional wallop, and hint at a more powerful film buried somewhere in the material. Ditto the mediation on the role of faith in the lives of LGBTQ people, a subject still rarely explored in the movies.

Predictable, confused, and yet somehow still compelling & moving, Latter Days will polarize viewers. We recommend giving it a watch for its more redeeming qualities (including a fine supporting cast that includes Mary Kay Place, Joseph Gordon-Levitt, Rob McElhenney, Jacqueline Bisset and Amber Benson), than for its eye-rolling love story. Think of it as a bit of comfort food before the Thanksgiving feast.