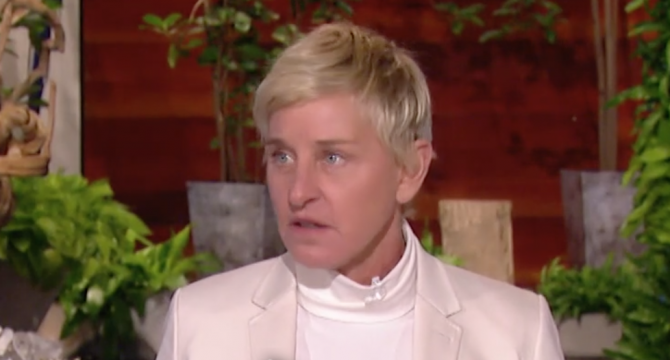 Embattled daytime talk show host Ellen DeGeneres thought she could squash an entire summer of scandals with a heartfelt, six-minute on-air apology during the season 18 premiere of her show, but it appears she may have miscalculated how deeply hurt and upset people still are.

Season 18 of The Ellen Degeneres Show premiered yesterday and kicked off with the comic finally addressing her and the show’s turbulent hiatus.

“How was everybody’s summer — good? Mine was great,” Ellen said, before talking about all the things she’s “learned things that happened here that never should have happened.”

“I take that very seriously and I want to say I am so sorry to the people who were affected,” DeGeneres said. “I know that I’m in a position of privilege and power and I realized that with that comes responsibility, and I take responsibility for what happens at my show.”

Now, several current and former employees of The Ellen Degeneres Show are speaking to Buzzfeed, which first broke the story earlier this summer, about how they feel about Ellen’s remarks and–surprise!–they’re not buying any of it.

“Not only did Ellen turn my trauma, turn our traumas, into a joke, she somehow managed to make this about her,” one former employee says.

Another adds: “When she said, ‘Oh, my summer was great’ and that was supposed to be funny I thought, ‘It’s funny that you had a rough summer because everyone was calling out all of the allegations of your toxic work environment and now you’re the one suffering?’”

And a third one notes, “The right thing would be to follow up with these people who are humans who were affected by this. They have a responsibility to kind of close this chapter of our lives and move on.”

“It just feels like there’s no ending to this for people who came forward and said things that happened to them and reopened these wounds and rehashed these memories.”

A current employee tells Buzzfeed that there’s still a lot of chaos behind-the-scenes, with higher-ups not being forthcoming about, frankly, anything. They also they don’t buy Ellen’s apology, suggesting the whole thing is calculated and insincere.

“It’s always tactical,” the employee says. “The average person will listen to it and make their own choices, but what people don’t always take into account is that information is power, and she’s sharing it now because it’s for premiere week and it’s to get viewers back, and that just feels the opposite of what this message is about.”

“When you’re talking about people who have accused her leadership of the seriousness of sexual misconduct, I don’t think it’s appropriate to have jokes in the monologue.”

Giving credit where credit is due, the current employee says it was “amazing” to hear her finally address the show’s toxic work culture after it had been swept under the rug for so many years.

“It’s kind of amazing that this is being discussed on her show,” the employee says. “To actually go from an environment where nothing is said and everyone keeps their head down to now when it’s the topic of her first show back is pretty amazing.”

“Whether or not I believe in this message that she is saying is another issue.”

Interestingly, at the end of Monday’s episode, Ellen didn’t close with her signature “be kind” message. Instead, she told viewers, “Feel this love and I’m giving it back to you, and spread that in the world. Spread that, not other things–just the good stuff is what we should spread. Alright, bye, everybody.”

So how did people on Twitter respond to Ellen’s apology? Well, it looks like those reviews are rather lukewarm as well…

Ellen was “cancelled” a lot over the past few months, and I stumbled across her apology today. I personally think she could’ve gone without making multiple jokes to keep it more serious (as the allegations were), but that is her brand. Thoughts? #CreCommPR https://t.co/5U0KLw3k0d

ellen got that youtuber apology

Ellen DeGeneres is gonna have to apologize for the apology lmao

imagine not being able to get thru an apology without a laugh track ?

anyways, when i was figuring out what i wanted to do post college the amount of industry folk who said to me “whatever you do, don’t work for ellen” is incalculable pic.twitter.com/BlNEPDXzfy

Ellen with that whack ass apology for bullying her employees and creating a toxic work environment. The whole thing was cringe.

Nobody believes Ellen’s apology, and that virtual audience of oversized iPads is terrifying. pic.twitter.com/xBITkhxV3G

Ellen DeGeneres gave that “apology” & 5secs later tapped into her narcissism saying how she’s an actress & her name is everywhere on the show. pic.twitter.com/PMyn2RHBvI

it sucks that ellen was able to offset most of the blame on to her EPs who were investigated—who were predatory and toxic and SHOULD be outed as such—but EVERYONE who works in hollywood knows ellen HERSELF was the highest cited complaint!!!! her apology makes it seem like she’s

Ellen plying victim, then making jokes about the accusations, then trying to flip the script, then making some vague apology and saying it’s a “new chapter”…. pic.twitter.com/KMIX7XNyKZ

The Ellen DeGeneres ‘apology’ seemed extremely fake and scripted. I was her fan for 10 years and I can’t look at her without thinking of all the people she’s hurt along the way and thinks an apology to her talk show audience is enough. It’s not enough.