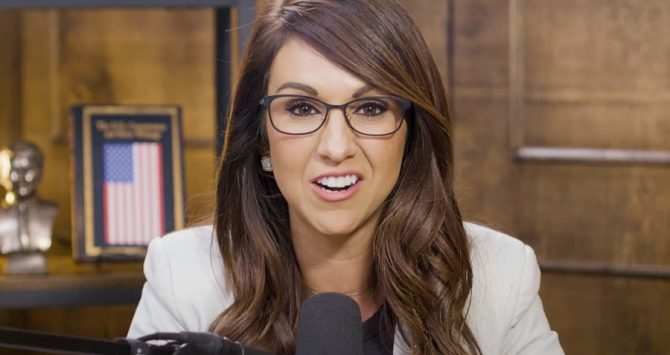 It looks like Lauren Boebert is about to go through some things.

American Muckrakers PAC, the group responsible for posting that video of Madison Cawthorn humping his cousin’s face, just launched the website fireboebert.com and is looking for photos, videos, and other damning documents it can use to try and stop Boebert from winning reelection.

Welcome to GOP political takedown strategy in the year 2022!

The group already claims to have major dirt on the God-fearing, anti-LGBTQ conspiracy theorist, including allegations that she once worked as an unregistered paid escort and used a website called SugarDaddyMeet.com to find clients.

“According to our investigation, Boebert was hired by a wealthy male client in Aspen, Colorado, who was a Koch family member. Boebert’s rich client subsequently introduced her to U.S. Senator [Ted] Cruz to run for political office,” a press release from the group reads.

Speaking of Ted Cruz, American Muckrakers PAC also says Boebert accepted $136,250 from the “family values” Texas senator when she first announced her run for Congress in 2019, and that she failed to disclose a $70,500 donation noted in Cruz’s own FEC filings.

The group also claims Boebert, who opposes abortion rights, has had two abortions herself, one of which was performed at Planned Parenthood, which she says she want to defund.

“Boebert had an abortion at a clinic in Grand Junction, Colorado, sometime in 2004 or 2005 when she was approximately eighteen years old. It is not known whether this abortion was related to SugarDaddyMeet.com clients or someone else,” the press release alleges.

“Then Boebert, twenty-three at the time, had an abortion in 2009 at the Planned Parenthood Clinic in Glenwood Springs, Colorado, ‘due to her work with a SugarDaddyMeet.com client.'”

But it still doesn’t stop there.

American Muckrakers PAC also claims Boebert got into an off-road drunk driving accident in Moab, Utah with her son and sister-in-law, Tori Hooper, two weeks before the 2020 primary election and that she “begged” Hooper not to say anything.

On its website, American Muckrakers PAC has published audio of an alleged phone call in which Hooper, who had to be taken to the hospital after the crash, confirms the story.

To be very clear, these are all just accusations and insinuations and we have no way of verifying whether they’re true. American Muckrakers PAC says it obtained the information through an “exhaustive investigation” along with a tip from an anonymous source.

Also to be very clear, there’s absolutely nothing wrong with being an escort or having an abortion. The issue here is Boebert’s hypocrisy, should the allegations prove to be true.

Of course, she’s not admitting to anything. In a tweet fired off late last night, the QAnon congresswoman appears to have responded to the story by writing: “Fact Check: Not true. Fake News. Four Pinocchios. Also…Y’all need Jesus!”

I don’t care that Lauren Boebert worked as an escort or that she had multiple abortions, I care that she’s a shameless fucking hypocrite. and a traitor. and a moron

Why didn’t Boebert report these fundraising ties to Ted Cruz to the Federal Election Commission in 2020?

Being an escort and having abortions are the only inoffensive things Lauren Boebert has ever done.

I do not know if this story about how Lauren Boebert was an escort and had two abortions is true.

What I do know is that it doesn’t matter because she’s a career criminal who beat her sex-offender husband and gave an illegal tour of the Capitol.

Here are the receipts. pic.twitter.com/itgTtvJlTt

Lauren Boebert was an unlicensed escort in 2019 with 4 previous arrests, no college degree, 2 previous abortions, and no political experience whatsoever. Why did Ted Cruz donate $125,000 to Lauren Boebert after they met in Aspen — and encourage her to run for Congress?

lauren boebert has eaten children and performs demonic rituals in her basement unto the god zamorphious that will bring the end of the world. RT IF YOU THINK THAT SOUNDS TRUE

Good morning to everyone who believes Lauren Boebert is a garbage human being for her rhetoric and actions during her time in Congress, and not for the choices she may have made before then.

Things that are ok to ridicule: hypocrisy, religious bias, willful deception, humanitarian regression, grifters, Lauren Boebert for being a turncoat piece of shit.

Things that are not ok to ridicule:
Sex work, personal reproductive choice.

What Lauren Boebert and I have in common (Never thought I’d ever say that): we’ve both had two abortions.

What Lauren Boebert and I *don’t* have in common: I am not a hypocritical shit who wants to deny pregnant people access to the safe abortions I had.

Lauren Boebert is finding out, like Madison Cawthorn before her, that she is about to go through some things.