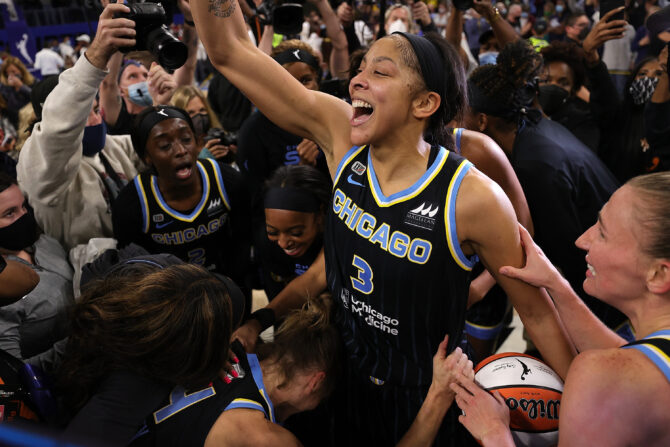 As basketball star Candace Parker competes this year in what is potentially her last WNBA season, her accomplishments on and off the court have cemented her status as one of the greatest athletes of all time. The fact that she’s also out and proud only adds to her incredible legacy.

If there’s an award to be won in basketball, Parker has won it. The two-time WNBA champion, two-time MVP, six-time All-Star, one-time rookie of the year and defensive player of the year and two-time Associated Press athlete of the year has excelled in her 15 seasons. And she even came back to her home team, the Chicago Sky, as a free agent last year to score one of those championship victories.

In December of last year, Parker celebrated another milestone — her two year wedding anniversary to her wife, Anya Petrakova. And with a baby on the way, Parker took to Instagram to express her love to her family… and casually come out publicly to the world.

“Happy Anniversary! 2 years ago, I got to marry my best friend in front of our close family and friends,” Parker wrote. “My heart could have exploded. I cried like a baby….To know me or you is to know our love. This journey hasn’t been easy. I am proud of us and what we have built and who we have grown to become both individually and together… We’ve always dreamed of growing our family….it’s surreal that we now have a baby on the way! Lailaa is pumped to be a big sister!”

Another big moment for Parker last year came when she was chosen as the first WNBA athlete to grace the cover of the massively popular NBA 2K video game, scoring a win for both LGBTQ and “badass female” visibility alike.

I’m honored to work with a company that’s investing in women and betting on us to succeed. I’m hopeful there will be many more badass females to follow ???? pic.twitter.com/WJan4YE7Qt

Parker is acutely aware of the impact her success will have on the next generation of athletes.

“I’m a purposeful goal setter,” she told the Chicago Sun Times. “If you’re just bettering things for yourself, then what are you really doing? I look at my idols and the way they have done things, the doors that they’ve opened, and I want to be like that. I want to leave something better. That’s the legacy.”

“To all the little girls, playing hard, putting in the work, dreaming big dreams, I see you. Keep pushing, never stop. Never stop,” she said of the doc, called Title IX: 37 Words That Changed America.

Whether or not she retires from professional basketball this year, we couldn’t be prouder of the contributions Candace Parker has made to her sport, and for raising the bar one what it looks like to be an LGBTQ star athlete.

And just because we’re here, let’s revisit the moment from just before her career in the pros began, when she became the first woman to dunk in NCAA tournament history: