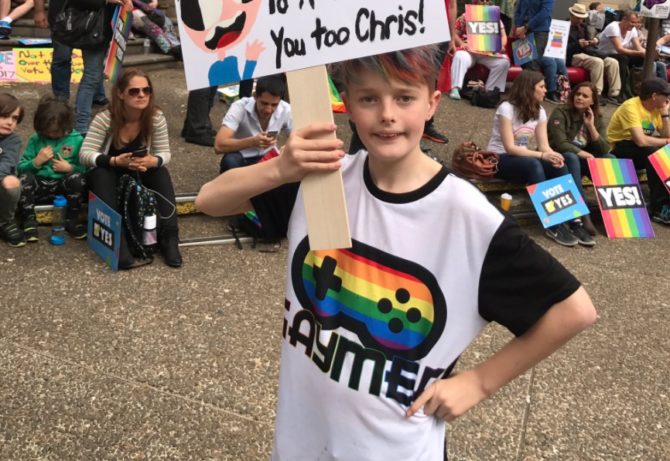 A boy can dream, and one 12-year-old in Australia is getting specific about his.

As the country continues to vote on the issue of same-sex marriage, demonstrations from marriage equality supporters are gaining visibility and volume.

Related: Chris Hemsworth comes out in favor of marriage equality

And where there are protests, there are creative signs.

All he wants to do is marry @chrishemsworth #VoteYes #marriageequality pic.twitter.com/Iv5e1XQLw8

“All I want is the right to marry Chris Hemsworth,” his sign read. “You’ve got five years until I’m 18 Australia! You too Chris!”

Townes, who identifies as gay, explained to GayStarNews that Chris’ “great jawline” is of particular interest.

It’s also all in good fun, though the weight of the situation isn’t lost on him.

“I know that I’m not actually going to marry Chris Hemsworth. It was a fun sign to draw attention to a serious matter,” he said.

“I have LGBTI friends and family and think they should be able to marry if they choose to. I marched for human rights,” he continued.

Australians have until November 7 to vote yes or no.