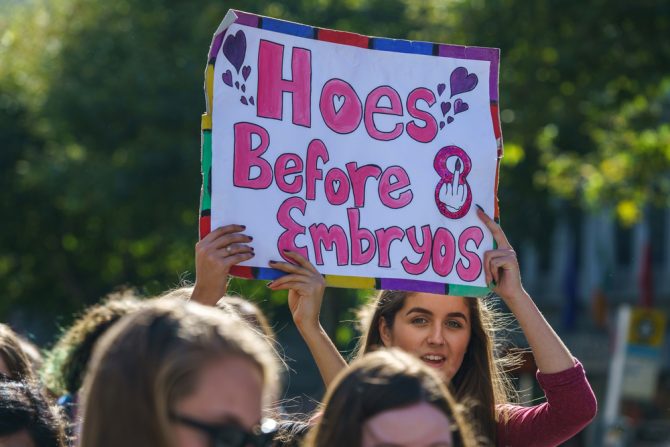 In the past three months, five states have passed draconian legislation restricting women’s access to abortion, in some cases as early as six weeks into a pregnancy. Georgia, Ohio, Mississippi, Kentucky, and Alabama seem hellbent on denying women their constitutional right to do what they want with their own bodies.

In some states, lawmakers want to force women to have babies against their wills, even in cases of rape and incest. In others, they want to impose 99-year prison sentences on doctors who perform abortions. There’s even been rumblings of women who have abortions being charged with homicide and penalized with lengthy prison sentences or even capital punishment.

So why is Queerty, a “gay news” site, reporting about this? The answer is simple.

When it comes to having our civil liberties threatened and our private lives policed by nosy lawmakers who all tend to fall into the same general category (straight, white, cisgender, Christian-identifying males), we know a thing or two about how that feels and how damaging it can be. It’s part of what led to the Stonewall Riots 50 years ago, a fight that’s far from over, but has been greatly strengthened by allies (read: straight women) who may not be personally impacted by our struggles but who still understand the importance of strength in numbers.

And now, here are 15 tweets that perfectly illustrate how abortion laws and LGBTQ rights are intertwined…

I hope my fellow gay men see the fight to defend abortion rights as our fight, too. Because what they want to control is non-reproductive sex + people who do not follow prescribed gender roles. Ring a bell?

These states that are making abortion illegal will probably take the next step of making same sex marriage illegal or being gay will be illegal.

Attacks on access to abortion are rooted in the desires of conservatives to deny people sexual agency. Gay men especially should understand that we have a self-interest in making sure all people have access to the means of providing for their own sexual health. https://t.co/cX8qguQiuQ

It occurs to me that so many gay men might be silent on the subject of abortion because they think it doesn’t effect them but guys these laws affect all humans and it is your MORAL RESPONSIBILITY to speak out and be an ally.

They came for abortion, but I didn’t speak out because I didn’t have a uterus.

Next they came for Muslims, but I wasn’t a Muslim.

Next they came for trans folks, but I wasn’t trans.

Finally they came for cis gay white men, because they NEVER STOP unless we make them stop now. https://t.co/pZzL4oy1SS

Conservatives are obsessed with two things: abortions and gay sex. Odd, since the best way to reduce abortions is to have gay sex.

Fellow queer/gay/bi men I hope you’re joining the fight for abortion rights now because the court that will overturn Roe will not hesitate to overturn Lawrence, a 6/3 decision. Gay sex has only been nationally legal since 2003. We’ve been in Afghanistan longer than that!

Amen to this. What’s happening with abortion rights in AL (and GA and OH) is horrifying. Gay men need to realize how deeply connected misogyny and homophobia are. (Need help with this? Read @c_j_pascoe.) Then they (we) need to speak out, raise hell, and donate $$$. https://t.co/1Ersoz3os6

We are losing our way. Were allowing our country to be ruled by men who think they’re holy warriors, put on this earth to kill sinners. First its outlawing abortion, then its outlawing gay marriage. Soon we’ll be executing people for practicing any religion besides Christianity.

Alabama: Ban abortion’s. You can always give kid up for adoption.

white gay men on twitter love poppin off jokes on twitter about the new abortion laws but are MIA when we really need them to help us in the actual fight for reproductive justice :///

conservatives: abortion is murder, just give the baby up for adoption
gay couples: can we adopt?
conservatives: pic.twitter.com/KPGMTtbKYS