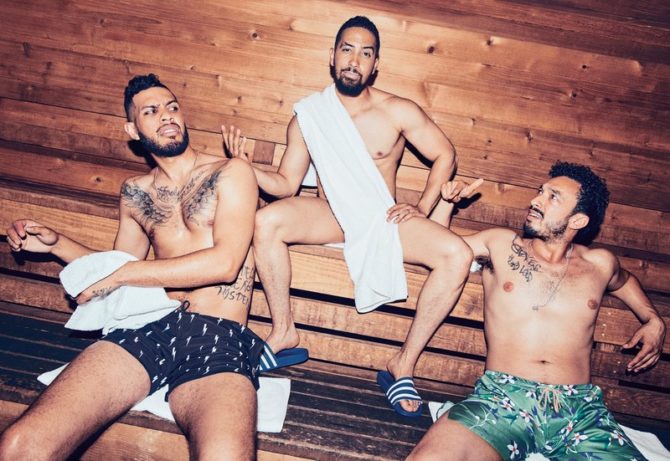 As you may recall, the guys from HBO’s Insecure recently slipped into their workout clothes and swim trunks for a thirst-quenching photoshoot for GQ.

The photos left most of the internet feeling parched… until a handful of homophobes had to ruin the fun by leaving nasty comments on social media.

Now, in an Instagram story posted this week, Sarunas Jackson, who plays Dro on the hit HBO series, takes on those antigay trolls.

Related: See why everyone’s gagging over this locker room photoshoot featuring the men of “Insecure”

“Me and the fellas did a shoot with GQ…,” he begins. “It was fun and it was a blessing. Now, if you [have] been following me—or if you know me personally—you know, I ride for my people [black people]. I ride for my culture. Now, I’m also going to hold you accountable, no matter who you are. It doesn’t even matter about culture. Period.”

Then comes the strong medicine. Jackson specifically calls out all those trolls who made antigay comments.

“How homophobic can people be? You know, we’re a group of men, who had our shirts off, and we’re doing GQ’s comedy issue, and we’re being called gay, up and down, right?” he said. “Mind you, none of us are gay in that group, and even if any of us were, who cares? That’s not the issue. I’ll tell [you] what the problem is, though.”

You guys are using homosexuality as a negative. Accusing us of being [gay] why? Why? It’s a big problem in the black community. Get secure with yourself, get secure. Ironically, our show’s title is perfect for a lot of you motherf*ckers out there. On top of that, the shining the light on the colorism issue. All the light skin dudes were [called] gay automatically. Crazy.

Jackson ends his Instagram story thanking Insecure fans for their support, and leaving just two words for the homophobic haters: “Do better.”

Watch the full Instagram story captured by The Jasmine Brand below.

"None of us our gay & you don't want to see these hands…" #SarunasJackson says some have made #homophobic remarks about the #InsecureHBO spread that men from the show did. He also points out #colorism. ***SWIPE*** (#insecure #YlanNoel #WadeAllainMarcus #NeilBrownJr #JayEllis @insecurehbo @jayellis @ronejae @wammywade @neilbrownjr)

what a joke
39 comments

what a joke
39 comments