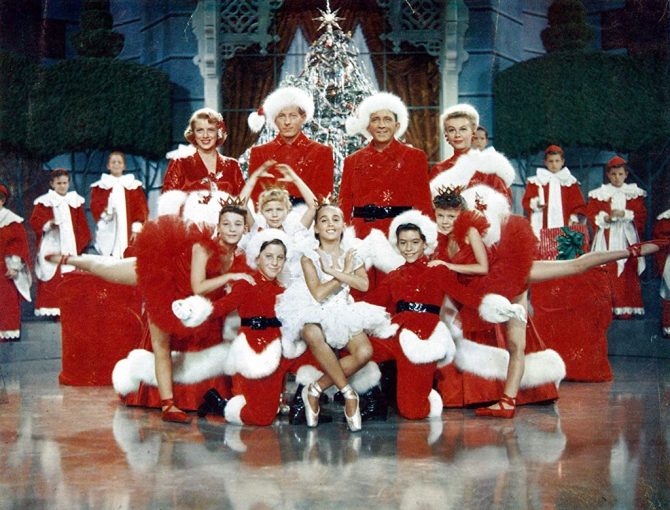 Yes, the holiday season has arrived, and of cinematic fare, White Christmas will no doubt land on the screening list of many trying to get into the holiday spirit. Yet the great unsung (pardon the phrase) hero of this stalwart musical isn’t bisexual actress Rosemary Clooney, possibly queer star Danny Kaye, or even the unforgettable title song. It’s Bing Crosby’s steely blue eyes, tight bod and sensual voice that keep us coming again and again. As it were.

The plot: a pair of army buddies turned composers (Crosby & Kaye) fall hard for a set of nightclub singer sisters (Clooney & Vera-Ellen) on a train ride through New England. When the four arrive at an inn owned by Crosby & Kaye’s former army sergeant, they opt to stage a new musical in hopes of helping him pay the bills.

That’s about it. The plot, in an old-Hollywood musical like this is almost beside the point–it’s just an excuse for the opulent production numbers. But make no mistake, White Christmas is Crosby’s show from start to finish. Twinkle eyed, masculine, virile and charismatic as Hell, Bing makes the movie both a heartwarming dose of holiday cheer, and a sexy romance. That he also does a drag number in the film is just an added bonus.