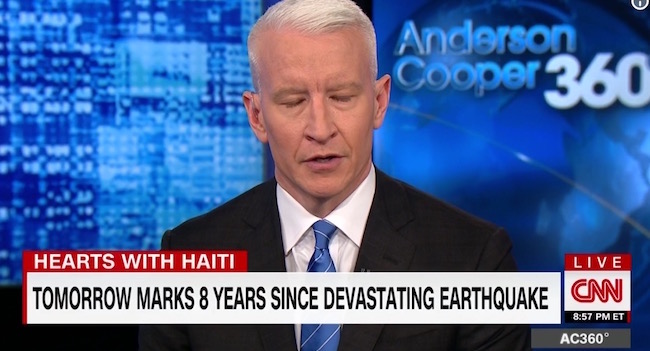 Last night, Anderson Cooper fought back tears as he lashed out against Trump’s glaringly racist remarks about Haiti.

During the segment, Cooper looked back on his visit to the region after the earthquake eight years ago (today) and paid tribute to a Haitian teacher he had in high school “who dedicated himself to teaching kids in America.”

He then recalled the moment he watched a 5-year-old boy be yanked out of the rubble after he’d been stranded underneath it for a week.

Related: Kathy Griffin: My friendship with Anderson Cooper is over

“Do you know what strength it takes to survive on rainwater buried under concrete?” he asked.

“Like all countries, Haiti is a collection of people — rich and poor, well-educated and not, good and bad. But I’ve never met a Haitian who isn’t strong. You have to be in a place where the government has often abandoned its people, where opportunities are few and where Mother Nature has punished the people far more than anyone should ever be punished…But let me be clear tonight. The people of Haiti have been through more, they’ve withstood more, they’ve fought back against more injustice than our president ever has….

Haitians slap your hand hard when they shake it — they look you in the eye, they don’t blink. They stand tall, and they have dignity. It’s a dignity many in this White House could learn from. It’s a dignity the president with all his money and all his power could learn from as well. On the anniversary of the earthquake, when this president has said what he’s said about Haitians, we hope the people in Haiti who are listening tonight, we hope they know that our thoughts are with them and that our love is with them as well.”

"Let me be clear…. the people of Haiti have been through more, withstood more, fought back against more injustice… than our President ever has" Anderson Cooper choked back tears as he reflected on his relationship with Haiti, and its people https://t.co/3arEalkKOM