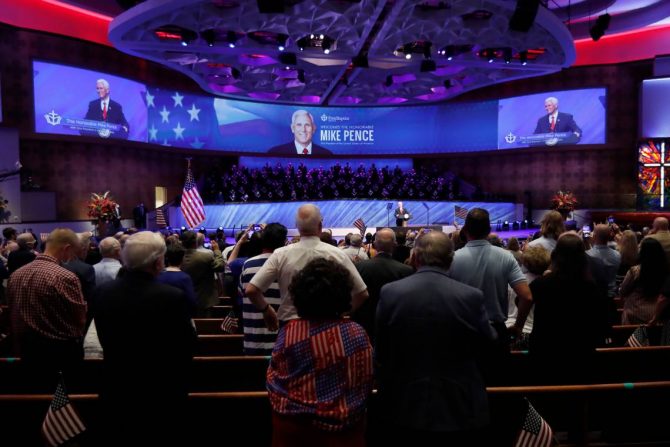 It pays to have friends in high places.

While small businesses across the nation struggle to stay open as coronavirus ravages the country, an antigay megachurch in Dallas was just approved for millions of dollars in federal aid.

First Baptist Dallas was just granted a forgivable loan worth $2 million to $5 million, according to data released by the Small Business Administration (SBA) yesterday.

Coincidentally, Mike Pence spoke at the church on June 28 for a Trump campaign event called “Celebrate Freedom Rally,” where 2,100 people, many without masks, packed inside to sing, worship, and spew Christian hate.

Also coincidentally, the church’s pastor, Robert Jeffress, who believes gay wedding cakes are a sign of the Antichrist, is a member of Trump’s evangelical advisory board.

According to its website, First Baptist Dallas opposes “all forms of sexual immorality, including adultery, homosexuality, and pornography.”

The church also states that that marriage is “the uniting of one man and one woman,” and that “the channel of sexual expression” should only be done “according to biblical standards, and the means for procreation of the human race.”

Since Pence’s “Celebrate Freedom Rally,” it has been reported several members of the church had tested positive for the coronavirus before the event even took place. It’s unclear whether Pence’s team knew about this ahead of his visit.

Related: Mike Pence spoke to 2,100 people jammed into an anti-LGBTQ megachurch in a COVID hotspot