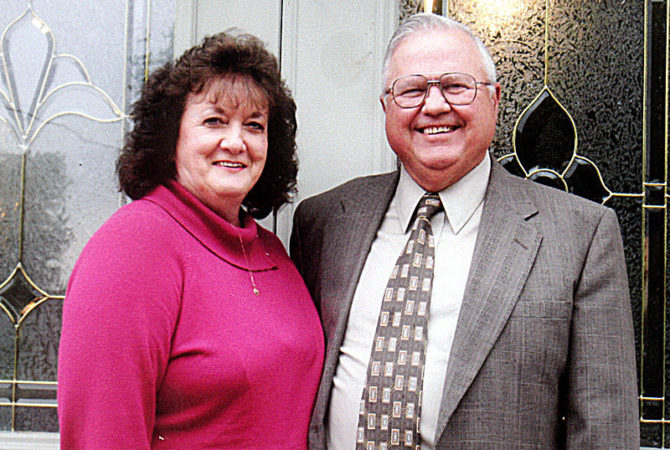 An Indiana pastor accused of child molestation and his doting wife were both arrested this week.

72-year-old Garry Evans is, er, was the pastor of the Rushville Baptist Temple in Rushville, Indiana where he regularly preached about the evils of homosexuality for nearly three decades.

Last October, he was arrested after several girls from his church, all under the age of 10, told their parents he had lured them into his office with candy then touched them inappropriately. Evans made bond as was released from custody.

Well, now, he’s back in jail. This time for trespassing and resisting law enforcement.

Earlier this week, Evans and his wife Gay stormed their son’s property. Apparently he and his parents had a falling out after the sex scandal broke last October.

The Evans circled their son’s yard then banged on the door. When their daughter-in-law told them they “weren’t welcome there,” they refused to leave and remained screaming and yelling on the front porch until the daughter-in-law chased them off with a baseball bat.

Police were called. According to reports, when they intervened, Evans and his wife became “verbally abusive and physically resisted officers.” They were arrested. Gay eventually posted bond and was released, but Garry remains in custody.

But the drama doesn’t stop there.

After getting home, Gay allegedly left her estranged son several threatening voicemails, which her daughter-in-law then shared on Facebook.

“I just got out of jail,” she said in one of the messages. “I hope you’re a very happy, son. Your daddy is in there and he’s probably going to be staying in there. What is wrong with you? You are sick!”

Other family members also joined in on the attacks.

“This is insane,” another voicemail from a different family member said. “What the f*ck is wrong with you, you stupid idiot?”

“You’re fine with them arresting your 72-year-old father and 70-year-old mother? Really? Really? Are you that big of a piece of scum?” said a third person in a third voicemail.

A jury trial in the molestation case is scheduled for March 20, 2018.