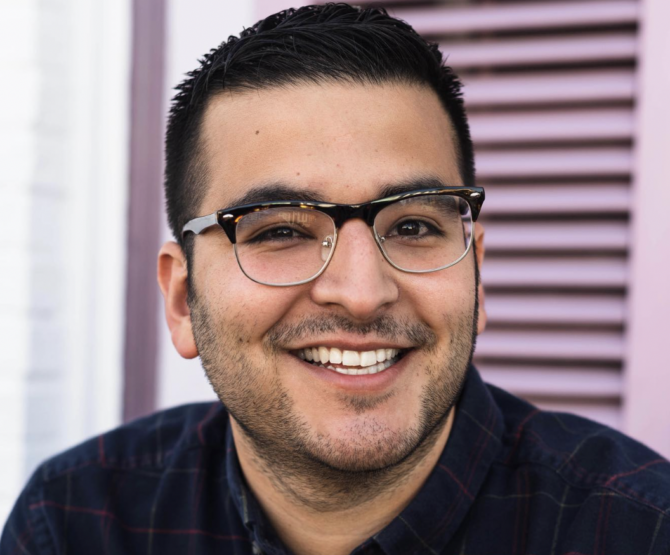 Aaron H. Aceves‘ new novel This Is Why They Hate Us follows 17-year-old Enrique as he navigates his summer trying to deflect the feelings he has for his best friend, Saleem. As a way to void out the boy, he searches for other prospects with the support of his best friend Fabiola, but learns it’s challenging to do when you’re a closeted bisexual.

The book is sweet and charming tale of personhood and self-discovery that will make you laugh as much as it will make you cry, and it will have you rooting for Enrique until the very end.

In a recent interview with Queerty, Aceves, mentioned the importance of amplifying POC queer and trans voices, what he wants readers to take away from his first published release, and what the zodiac signs are for the three main characters. (There are a lot of earth signs, arguably.) Check out what he had to say…

Queerty: Okay, I’m really excited to speak with you because I read This Is Why They Hate Us, twice, and bravo! High-key, this is my Heartthrob.

Aceves: Well, thank you so much! Yeah, I wrote this for a 17-year-old me, and I wish he could’ve gotten it… But yeah, there are kids who are gonna get it!

It’s going to affect a lot of people. Readers will see themselves in many of these characters, which is really cool. How did you conceptualize the original idea for the book?

So initially, there was no plot. I sat down one day after work, and I heard this kid’s voice in my head. I had maybe, like, 2,000 words, and I didn’t know what it was. It was a little aimless, but I knew he had a crush on three different guys.

The next day I came home, I wrote another 2,000 words, and then it sort of took more shape. At the end of it, I kind of felt, and my agent told me this when she signed me, she was like we need to create a plot. But I always had the characters in my mind: Enrique, Saleem, Fabiola, Manny, Tyler, and Ziggy. I was really tuned into who they were.

Do you see yourself in any of these characters?

When I was 17, I identified as straight. But, actually, the funny thing is, I was going through a lot of the stuff that Enrique was, except I was 24 at the time when I wrote it. Enrique is really close to my heart. He feels more like my son than myself in a weird way, I call all the kids in the book my kids.

Speaking of Enrique, it’s awesome that you have a bisexual lead character, just because there are a lot of misconceptions with a lot of portrayals of bisexual folks in media. Do you have a favorite bisexual character or figure in film or TV? And why did you feel it was necessary to make Enrique bisexual?

I think the earliest sort of bisexual character that was really important to me was Callie Torres on Grey’s Anatomy, played by Sara Ramirez. She’s Latina, and she late in life figures out her bisexuality, but at the time, I wasn’t ready to deal with my own sexuality. So I kind of ignored it but looking back, that opened a door. But I made Quique (Enrique) bi because I’m bi.

It’s wild to me how you rarely see bisexual characters in 2022? Like, really?!

In addition to having a bisexual character, you also have an Afro-Latina character. When we see the portrayals or narratives of Latina/Latinx folks don’t see any dark-skinned Latin folks. I just wanted to ask why it was important to you to make Fabiola Afro-Latina.

Regarding Fabiola’s experience, there’s one part in the book where Quique says Fabiola has confided in me about how she feels as a black Latina in spaces for primarily non-black Latinas. And I was like, I can’t parse that apart. It’s not my experience, but I have to at least mention and acknowledge that. It’s from Quique’s perspective, which allows me to not gloss over it but to sort of engage with it as he would.

What I also loved about this book is that it tackles a lot of complexities for a young person. One is depression. Did you have any difficulties unpacking the characters, traumas, or any difficulties writing the somber moments of the book?

I’m very open about my mental health struggles. So, to talk about that in a book with Quique didn’t feel so hard. In fact, it sort of helps to put it all down on paper. I did have to go into this mindset of really wanting to die. What are the thoughts going through my head? And it was interesting.

Again, I don’t see Quique as myself, I sort of see him as a family member of some sort. But since I’m the writer, when I make him think those thoughts of, you’re worthless, no one loves you. It’s easy for me to be like, that’s not true. And then I think about it for myself. I think putting it on a fictional character was, actually a very helpful way of convincing myself. I’ll be okay, too.

Now, for the fun questions. Who are Enrique three most listened to artists on Apple Music or Spotify?

Oh, that is a fun one! I think Dua Lipa would be a big one, Troye Sivan, and Lil Nas X.

If This is Why They Hate Us were made into a movie or TV series, who would you cast as the main three leads?

Okay, so Saleem, unfortunately, I can’t think of any young Palestinian or Arab actors to play him at the top of my head.

For Fabiola, it’s interesting. My publisher comps, This Is Why They Hate Us to Never Have I Ever on Netflix, and there’s a Queer Afro-Latina character named Fabiola in Never Have I Ever. And I wrote my book before it came out, and I remember saying she would be perfect.

For Quique, Alex Claremont Diaz. He’s a Mexican actor playing a bisexual character in Red White and Royal Blue. And I’m like, If we could age him down somehow, he could play him.

You basically mentioned this with Fabiola and Saleem, but what do you think the trios Astrological signs are?

Saleem is definitely a Virgo. Quique… I’ve gotten pushback on this, but I think he’s a Taurus. I know, he’s chaotic. But when he’s with Fabiola, he’s the reasonable one. He’s the one who changes based on who he’s around. So when he’s around Saleem, he’s more chaotic because Saleem is a Virgo, and Fabula, who’s an Aries, when he’s around her. He’s calmer. So, I think that’s why I see the Taurus.

And finally, what do you want readers to take away from reading this book?

Subscribe to Queerty for a daily dose of #life #aaronh.aceves #interview stories and more