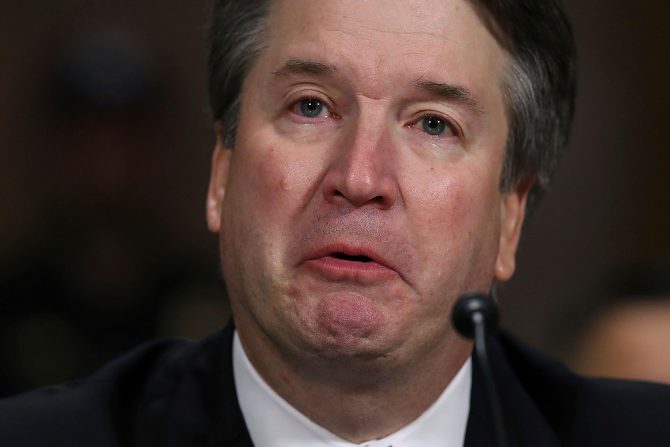 Brett Kavanaugh is once again trending on Twitter after calls for the FBI investigation into his alleged sexual misconduct be reopened. The calls come after the bureau and its director, Christopher Wray, were accused this week of mishandling allegations against Dr. Larry Nasser of molesting and raping Olympic gymnasts.

Earlier this summer it was reported that the FBI received over 4,500 complaints against Kavanaugh, who likes beer and hates LGBTQ people, when it conducted a background check on him in 2018. But instead of looking into those complaints, it closed the investigation after just four days and handed over the findings to the Trump White House.

We all know what happened next.

Former federal prosecutor Glenn Kirschner took to social media this week to demand the Biden White House take the 4,500 complaints and conduct its own investigation.

“Let’s start doing some damn justice,” he said, noting that women in Texas deserve it as do the rest of America.

FBI/Chris Wray Failed to Investigate 4500 Tips about Kavanaugh's Supreme Court Nomination. Here's what both the Biden administration and Congress must do now. Because #JusticeMatters https://t.co/8vqFSfZbl0 via @YouTube

Here’s what other people are saying…

There really is no dispute about the investigation into Brett Kavanaugh was a sham. Whether he's guilty of something or not, the "investigation" was a joke. So why do it for real this time. If he has nothing to hide, he should answer all questions. It's time.

Not sure why anyone is surprised about the FBI. In case y’all forgot… Brett Kavanaugh?

Quite a bit of hypocrisy from these GOP Senators who are preaching about the courage of these women speaking out in this Larry Nassar hearing, but they heard testimony from Christine Blasey Ford and voted to confirm Brett Kavanaugh in spite of her courage.

The FBI lied to cover up sexual abuse by Larry Nassar

FBI Director Christopher Wray today: “I don’t have a good explanation for you.”

How many of you want Brett Kavanaugh to be thoroughly investigated immediately & removed from the Supreme Court?

I want to see something. Raise your hand if you think Brett Kavanaugh is a disgrace to the Supreme Court.

Trump fired James Coney for investigating him. So why wouldn't Biden fire Christopher Wray for failing to investigate Brett Kavanaugh or Larry Nassar?

Kavanaugh’s nomination marked the first time in history that an FBI tip line had to be created for receiving information during a Senate confirmation inquiry. After receiving over 4,500 calls, the FBI spoke to just 10 people before closing its investigation. Neither Kavanaugh nor his accuser, Dr. Christine Blasey Ford, were ever interviewed.