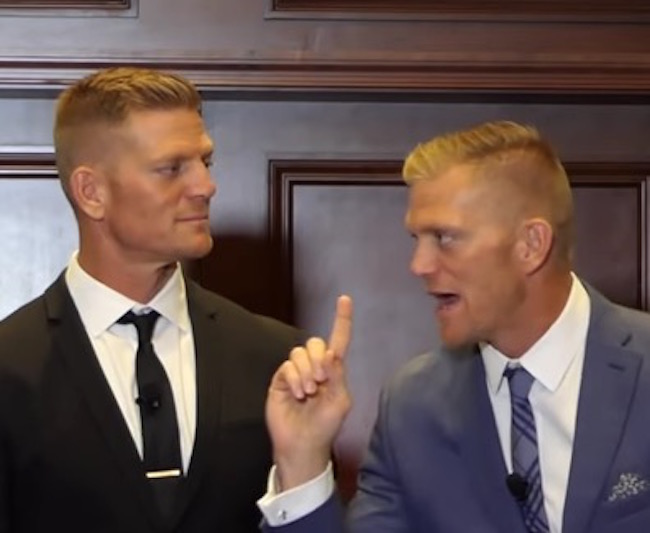 Hey, Christians; you tawdry fools — all this time, you’ve been thinking about light in the completely wrong way.

Eerie Jesus-hounds The Benham Brothers recently spoke at the 20th anniversary Gala for the fervidly right-wing webpage LifeSiteNews, teaching the audience how to look at light in the right way.

“The only way darkness prevails is when the light is turned off,” says one of the twin brothers — either Jason or David; there’s interchangeably incomprehensible.

“I don’t open a closet door and all the darkness from the closet come and fill the room. It’s the light from the room fills the closet… and we, as people of faith, have to look inward first and say ‘okay, we’ve got gay marriage, okay we’ve got abortion on demand, we’ve got rampant perversion….’ We’re deconstructing the image of God at every level of society… It’s gotten begin here first [points to self]. We’ve gotta look in first!”

Later on, Jason tells Christians they must become like “coal” so they can “burn brightly” for Jesus. Because, see, the “wind of culture is blowing” in an attempt to extinguish all the pretty Christian lights.

They somehow manage to tie every strand of this gobbledegook back to when home improvement network HGTV canceled their reality show for being, in the parlance of Right Wing Watch, “antigay, anti-Choice extremists.”

“Do you know how God gets the light that’s inside of you out into the world?” Jason asks.

After all their talk about the darkness of closets and how the devil wants to blow you as hard as he can, The Benham Brothers dutifully teach the audience what a “man trap” is, and how not to fall into a “man trap.”

Watch their speech in the below videos: