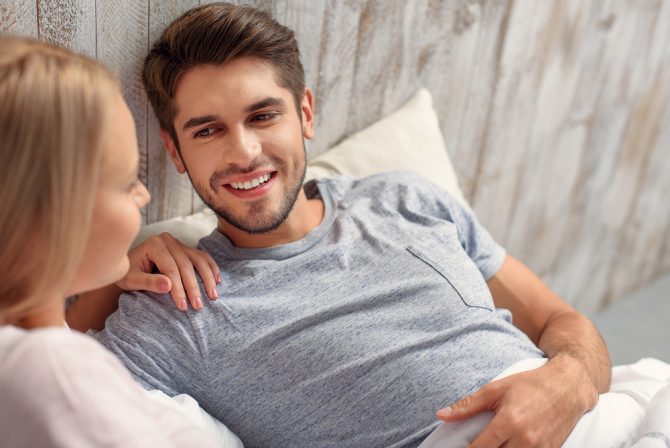 A bi-curious man in his 30s says he’s ready to take the plunge into the man pond, and his girlfriend is totally supportive of it, but he doesn’t know where to begin, so he’s seeking help from advice guru Rich Juzwiak over at Slate.

“During my life I’ve been occasionally attracted to men, but was more attracted to women, so to keep it simple, I’ve only dated women,” the 30-year-old man writes.

He recently brought this up to his girlfriend of three years and she was totally fine with him experimenting with another dude.

“I’ve become very intrigued with the idea,” the man continues. “I’m just not sure how to proceed. I’m not totally sure what I’m looking for. At the moment, to start, I want to make out with a guy, and see where it goes from there, maybe more, maybe not. I’m not looking for another relationship, just a few flings.”

The question is: Where does he find a guy to fool around with?

Definitely not Tinder, he writes, because “I don’t want someone to think I’m looking for a relationship.” He’s heard about some app called Grindr, but he’s also not sure that’s the right avenue since “guys would probably be expecting more.”

So he wonders: “Is a gay bar the right idea?”

In his response Juzwiak first congratulates the man on being ready to embrace this part of his sexuality and assuring him there is a lot of fun in store.

Now, to answer the guy’s question…

He continues, “Firstly, labeling yourself as straight/curious on an app for men who have sex with men will likely get you a lot of interest, and more options mean the greater ability to find someone who will be into what you’re into. You can explain yourself, and most guys will pay attention. … I’m sure there are more than a few who would be open to exploring with you at your pace.”

That said, Juzwiak cautions the man that he may want to brace himself for some, ahem, “explicit conversations.”

“You will almost certainly receive messages from guys who want to be pounded out (for example) and immediately lose interest when they realize you are not a dom d*ck distributor at the moment,” he writes. “The process may be frustrating at first, but I think a hook-up app is at least worth a gander.”

Juzwiak adds that bars are great places to meet people as well, but he needs to be very straight forward with anyone he meets.

“I encourage you to be upfront with your inexperience and desire for a snail’s pace,” he writes. “Hold onto that and, to the best of your ability, resist pressure to exit your comfort zone.”

“You’re opening yourself up to the world of expressing and receiving affection from men, and that can be such a beautiful gift when cultivated with communication and care. I’m excited for you.”

What advice would you give this guy? Sound off in the comments section below…