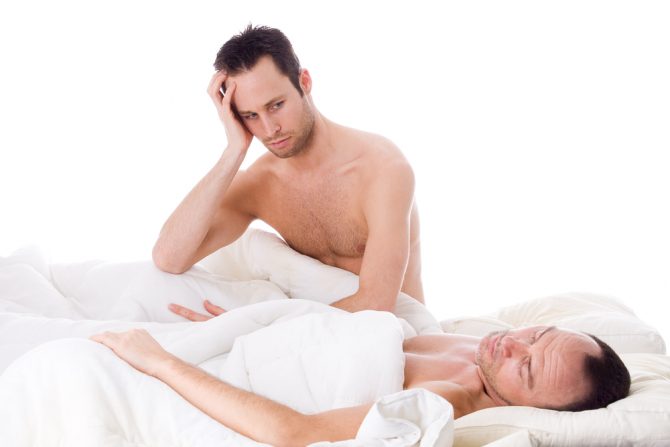 A bisexual man in his 30s says he likes sleeping with men, but he’s worried that he treats them too much like sex objects, so he’s seeking advice from Pamela Stephenson Connolly at the Guardian.

“When I am physically intimate with a man I find it difficult, if not impossible, to maintain an erection,” the man confesses.

“In some ways, this is fine, but I’m worried that the men I sleep with think I’m not enjoying it, or don’t know whether I am or not.”

Digging deeper, the man goes on to say that he thinks it might have to do with the fact that he’s just not as attracted to men as he is to women. Nor does he feel the same sort of emotional bond after sex.

“I don’t enjoy cuddling with men or kissing like I do with women,” he says. “As a result, I treat the men I’m with like sex objects.”

Now he isn’t sure what to do.

He concludes, “I’m worried that if I end up with a woman, I’ll always have something missing from my sex life, but that I am not attracted to men enough to have a satisfying monogamous relationship with a man.”

Related: Man disgusted with himself for only sleeping with ‘unattractive’ guys, isn’t sure why he keeps doing it

In her response, Connolly explains that the man doesn’t have to choose one or the other.

“You accept that you are bisexual, so you can fairly comfortably decide to have relationships with people of either or both genders,” she writes.

“And you will discover that in a longer-term monogamous relationship (if you want that at any point) it is the particular person and how he or she makes you feel when you are together that is important–not their gender.”

Connolly goes on encourage the man to think outside the box a little more when it comes to sex and relationships.

“You seem to be concerned about your future, and consider monogamy a goal, with one person of one gender,” she writes. “But there are people out there who can manage long-term triangular relationships–in fact, some actively seek triads. See if you are one of them.”

What do you think of Connolly’s advice? Share your own pearls of wisdom in the comments section below…