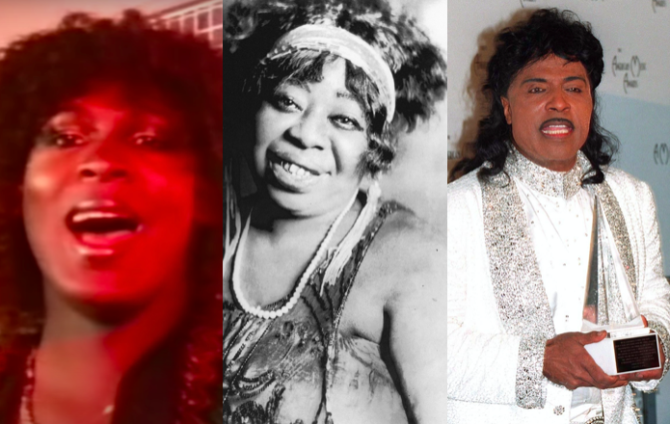 In 2019, Lil Nas X made musical history–in more ways than one. Not only did his country-rap smash “Old Town Road” spend a record-setting 19 weeks atop Billboard’s Hot 100 pop singles chart, but in the middle of its chart triumph, on the final day of Gay Pride Month, Nas X, then 20, came out as gay. The best part: His career continued to skyrocket, unscathed. Months later, he scored six 2020 Grammy nominations, including Album and Record of the Year, as well as Best New Artist.

Whether it’s a sign of increased acceptance for the LGBTQ community overall, queer visibility in music is indeed gaining in the new decade – both on the charts and at the Grammys, where Nas X ended up winning two gongs in 2020. The next year, queer visibility dominated the Best New Artist category like never before. There was more LGBTQ pride among the crop of newcomer nominees than I can recall there being in any previous year–and like Nas X, most of them are Black.

Four Black contenders have links to the LGBTQ community. Haitian-Canadian DJ and producer Kaytranada is openly gay, and socio-political rapper Chika is bisexual. In addition, the two front-runners, Megan Thee Stallion and Doja Cat, both have associated themselves with sexual fluidity. (Of the White nominees, Phoebe Bridgers identifies as bisexual, while Noah Cyrus has a familial LGBTQ connection: Her older sister is the openly bi Miley Cyrus.)

Hip hop and R&B remain riddled with homophobia, despite the success of LGBTQ acts like Big Freedia, iLoveMakonnen, and Young M.A, but a few years ago, a successful gay budding fashion icon rapper barely out of his teens would have been unfathomable. Now we have out Black performers like Nas X, Billy Porter, Frank Ocean, Janelle Monae, and Kehlani enjoying considerable critical and commercial success without having to wear a mask of heterosexuality.

But where would any of them be without music’s Black LGBTQ pioneers?

As with so many things, women led the way. In the 1920s, top Black female stars Josephine Baker, Bessie Smith, and Ma Rainey were openly queer in their private lives. Rainey’s bisexuality is presented as a matter of fact and not a dirty hidden secret in the Netflix biopic Ma Rainey’s Black Bottom. She and her aforementioned contemporaries paved a path for Black female LGBTQ performers that Billie Holiday would walk down in the 1930s. Although Holiday biopics like 1972’s Lady Sings the Blues and the forthcoming The United States Vs. Billie Holiday, focus on her heterosexual romantic entanglements, Lady Day was openly and proudly bisexual. She romanced women as well as abusive men, and Tallulah Bankhead was rumored to have been an A-list female lover.

Perhaps unsurprisingly, considering the different levels of acceptance among heterosexuals for LGBTQ men and LGBTQ women even today, earlier gay Black male musicians were more likely to keep their sexual orientation a closely guarded secret. Johnny Mathis and Little Richard managed to become huge stars during the ’50s, partly, one is tempted to presume, because they remained in the closet. Richard, who died in 2020 at age 87, didn’t come out until the mid-’90s but spent his entire life flip-flopping on the issue, while Mathis, now 85, confirmed he was gay in 2017 after decades of speculation. In the 1960s-set 2018 Best Picture Oscar winner Green Book, jazz pianist Don Shirley is shown cavorting with a male lover under cover of the night in the Jim Crow south – and getting thrown in jail after being caught by a cop. It’s a scenario that likely played out for a number of his contemporaries, with far more violent consequences.

During the post-segregation ’70s, Billy Preston, who was known as the “Fifth Beatle” (an honor also bestowed upon Fab Four producer George Martin) for his piano work on songs like “Get Back” and “Don’t Let Me Down,” became a major superstar. He made an indelible mark during the early years of the decade as the performer of hits like “Will It Go Round in Circles” and “Nothing from Nothing” and the author of the Valentine’s Day classic “You Are So Beautiful,” a love song of the century written by a queer Black man. According to the episode of the TV series Unsung that’s dedicated to him, Preston, who died in 2006 at age 59, was openly gay with his friends and work associates, though he was discreet in public.

By the end of the ’70s, Sylvester was bringing Black queer sexuality out into the open like no other star before him had dared to do. He was also proudly gender fluid (long before “gender fluid” became a thing) and still managed to become a major disco sensation, via hits like “Dance (Disco Heat)” and “You Make Me Feel (Mighty Real).” It’s hard to imagine that Boy George would have so easily become a pop superstar and household name just a few years later without the precedent of Sylvester, or that RuPaul would have gone mainstream in the ’90s if Sylvester hadn’t gotten there first. RuPaul’s Drag Race is now a staple of gay entertainment that’s also wildly popular with straight audiences, and we owe it, in part, to the ground broken by Sylvester.

In the final two decades of the last century, Black LGBTQ musicians continued to thrive, through the work of diverse artists like Luther Vandross, Tracy Chapman, Frankie Knuckles, and Meshell Ndegeocello. Sadly, the stigma of HIV in the ’80s and ’90s inspired more aggressive homophobia among the heterosexual masses that forced many gay performers underground, where they kept their sexual orientation on the down low. Vandross, who died in 2005 at age 54, never even publicly acknowledged he was gay during his lifetime.

Thankfully, today’s Black LGBTQ musical talents are freer to be who they are. They can serve as encouragement to young LGBTQ Blacks with budding musical talent that they don’t have to hide in the closet to be successful – not anymore. This Black History Month, Black queer musical icons of tomorrow hopefully can find comfort and inspiration in the fact that queer Black musicians aren’t just making musical history in 2021. For the last century, they’ve been shaping it too.

Jeremy Helligar is a New York City-based journalist from the U.S. Virgin Islands and the author of Storms in Africa: A Year in the Motherland and Is It True What They Say About Black Men? Read an excerpt from his new book HERE.