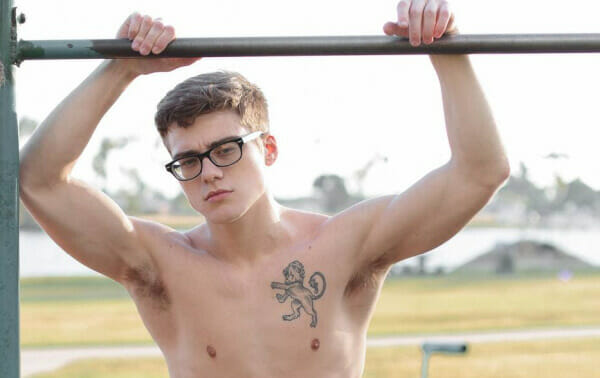 Is it possible to be lonely when you have over 100,000 followers? According to gay adult film star Blake Mitchell, the answer is YES!

Blake may be a super popular adult film star with tons of followers and over 20 adult films to his credit, but in a new video titled “i’m lonely :(” shared on his YouTube channel, he says fame and fortune isn’t all it’s cracked up to be.

“In this week’s episode, I wanted to open up to you all and talk about the difficulties and challenges that my career has imposed upon my dating life,” the 20-year-old writes in the video’s description.

Being an adult performer, he says, is a “unique kind of fame” that makes stuff like dating and having a serious boyfriend really challenging.

“The hardest part of it, when you have 100,000 followers, is finding someone who’s genuine,” he laments.

More often than not, Blake says, people are more interested in his profession than in who he is as a person.

“I’ve been out to the bars where people will say things to me that, because I am a sex worker, they think is acceptable to say to a total stranger for example complimenting my d*ck size, my body, making sexual remarks to me.”

It’s almost like they view him as some kind of object or sex symbol or something. And that sucks.

I’m missing a piece of life that I could be having right now…and that’s a strangely painful thing to deal with to realize that I’ve picked this job over my personal life… It makes me sad sometimes, but mostly it just contributes to that loneliness… The odds are stacked against me to find somebody who’s going to deal with my job, actually accept it, much less support and encourage me.