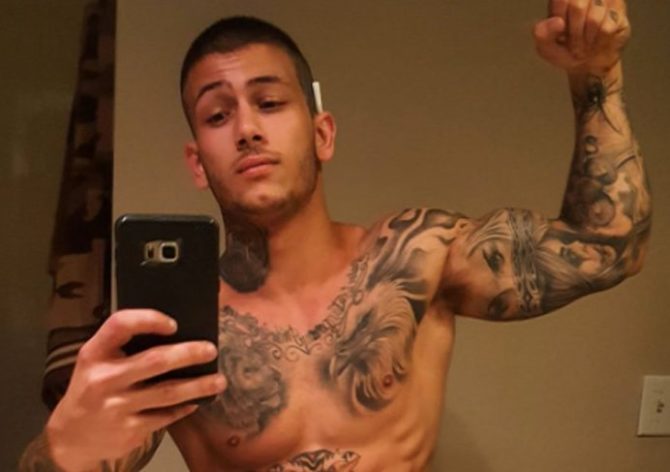 We’ve all done things we later regretted. If we’re lucky, we learn from our mistakes and move on. But what happens when you can’t move on because the Internet won’t let you? That’s what ex-amateur-gay-for-pay solo performer Michael Hoffman wants to know.

“I lose girl after girl,” Hoffman says in a new video posted on Twitter this week. “I can’t land a relationship.”

Four years ago, Hoffman was at the top of his game. He was known as the young, hot, tatted-up bodybuilder who posted a series of solo videos to a number of pay-for-view gay sites and raked in tens of thousands of dollars.

The videos ranged from titillating to raunchy, and at least one featured Hoffman, who identifies as straight, alongside another guy.

But now, the young, 20-something ex-performer says his past professional decisions are seriously affecting his ability to find a job or girlfriend.

“My decision four years ago to start making videos has really f*cked me up,” an older, wise Hoffman says. “I lose girl after girl. I can’t land a relationship. Can’t get a job. Can’t go anywhere. Can’t do anything.”

“Every single person I meet finds out or knows about it, gets creeped out, doesn’t want to be f*cking friends with me.”

We can’t help but wonder if that’s really because of the video or if, perhaps, Hoffman has some other character flaws he’s not disclosing. In any event, it’s been tough for him.

“My f*cking life sucks,” he continues. “I regret everything I ever did. Everything. So f*ck my life. F*ck my life, on the roof.”

Hoffman claims he was once paid $10,000 for 14 videos. Now, those same 14 videos only command $250, which is hardly a livable wage. On top of that, he says, he feels serious remorse over the people he hurt.

“I feel bad for a lot of people,” he says in another video. “I have screwed a lot of people over, and, it was not right of me at all. I’ve been going through a really, really rough time with my family, but that’s no excuse to f*ck the people over.”

Hoffman is trying to put his past behind him and is currently training to become a tattoo artist. Here’s hoping he’s able to find peace with his situation.

Watch the video below…