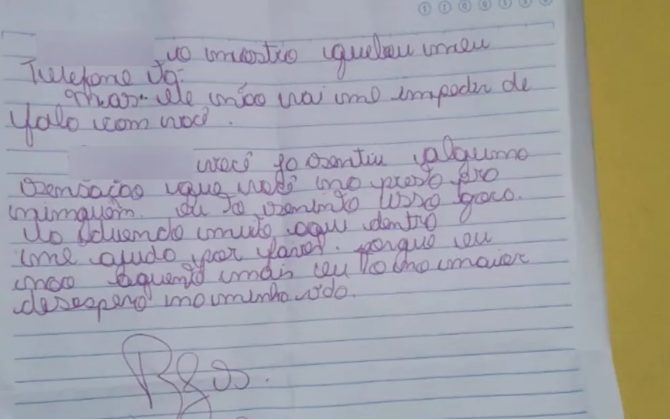 Police in Brazil have opened an investigation after a young teenage boy sent a desperate letter to his neighbors begging them for help from his abusive homophobic father.

“Have you ever felt like you’re not good for anyone? I’m feeling it. It hurts a lot here,” the 14-year-old boy, who lives in the city of Jataí, wrote. “Please, help me.”

The adolescent went on to say he is in the “greatest despair of my life” then alleged his father was abusing him for being gay.

After receiving the letter, the neighbors witnessed the father shouting at his son, which they recorded.

“I’m tired of telling you. Didn’t I already tell you to change?” the father can be heard yelling in the tape. “You have to change! Do you know why? Because if you don’t change, I will kill you! I will blow you up!”

“He said that he does not care, that he accepts and that he had already spoken with the adolescent, but he caught him accessing pornographic videos on his cell phone and did not control his anger,” police spokesperson Paula Daniela Ruza told Brazilian media.

But the boy’s mother said this wasn’t true and that the father became irate after learning their son “has a tendency to homosexuality.”

Neighbors also say the abuse was worse than the father described

“We hear him screaming, asking for help,” one person told media. “It is difficult for people who are mothers to see a situation like this.”

Police also say the boy had bruises on his legs and other parts of his body. He was removed from the home and an investigation into the matter has been launched.

In 2019, the Supreme Court in Brazil ruled to make acts of homophobia and transphobia a criminal act, which drew the ire of the country’s vehemently homophobia president Jair Bolsonaro. Judge Luiz Fux described homophobic crimes as “alarming” and an “epidemic.”