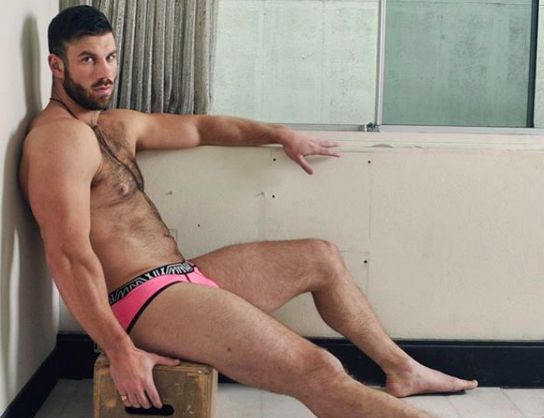 The road to hell is paved with good intentions. That’s the takeaway openly gay wrestler Dave Marshall got after he announced he was using his OnlyFans platform for good.

“After some thought, I did start it up with part [of the] proceeds going to Beyond Blue–a suicide prevention charity,” the 29-year-old explained to GayStarNews last month.

The reason the money I raise from my OnlyFans goes towards Beyond Blue is seeing everyday how big depression and anxiety has become in society and almost overlooked.

[It’s my] first time saying this but my father took his life last year.

Older men have a “Harden the fuck up” mentality they were brought up with.

Stats on LGBT in this area are quite scary too so I hope I can in some way, give back to my community. Positivity is everything.

Marshall raised more than AU$5,000 for Beyond Blue.

But when the organization got wind of the whole thing, it reached out to him to say, “Thanks, but no thanks!”

GayStarNews now reports that the charity contacted Marshall in an email after his story went viral to say it can’t accept his donation because the funds come from activities such as “gambling, alcohol and pornography.”

It also said he used Beyond Blue’s name to “promote the sale of products” that he offers “in the field of pornography” and that it requires all fundraising activities be registered with the organization.

The charity then requested Marshall remove all mention of it from his social media profiles and personal website, and requested “future consumers of your products are not given the impression their purchase is in any way supporting Beyond Blue.”

Marshall admits he was a little miffed by the whole thing at first, but he didn’t let it get to him for long.

“To me, money is money,” he tells GayStarNews. “It came from the heart.”

“At the end of the day, it was a personal donation of my money but I don’t want to be quiet about what I’m doing. So it wasn’t the charity for me.”

He says he’s since found another charity that focuses on mental health to give the money to.

Black Dog Institute is a non-profit based in Sydney that focuses on diagnosis, treatment and prevention of mood disorders such as depression and bipolar disorder.

“They are another of the bigger ones in Australia,” Marshall says. “As my father was one of the main factors in the choice of charity, it’s quite fitting.”

This time, Marshall did his homework and called the charity ahead of time to confirm they would accept his money.

When Black Dog Institute said it was more than happy to take the donation, Marshall decided to double it, giving a total of AU$10,000.

“It’s a cause that I am proud the help,” he says. “Now more than ever, I’m even more proud of the organization for accepting me and my donations.”

Related: Meet the gay wrestler who started making adult films for a good cause