Tesla And SpaceX boss Elon Musk has got into an online spat with Ramzan Kadyrov, the warlord head of the Chechen Republic.

Musk, like so many others, has been disgusted by Russia’s invasion of Ukraine. In a show of solidarity, Musk re-routed his Starlink satellites to help maintain internet connections in Ukraine.

On Monday, in a surprising twist, Musk challenged Putin to a fistfight. He tweeted, “I hereby challenge Vladimir Putin to single combat,” he said, using the Russian alphabet to write Mr Putin’s name.

“Stakes are Ukraine,” he continued, writing the country’s name in Ukrainian.

In a later tweet, he tagged the Kremlin and said, “Do you agree to this fight?”

Although the Kremlin has not responded, one of Putin’s lapdogs, Chechnya’s Ramzan Kadyrov, did.

Kadyrov is the Chechen leader who presided over a purge of gay people that resulted in men being murdered and others being tortured or detained in camps. Kadyrov posted a message to Telegram, which Musk reshared on Twitter.

Thank you for the offer, but such excellent training would give me too much of an advantage.

If he is afraid to fight, I will agree to use only my left hand and I am not even left-handed.

Kadyrov dismissed Musk as “effeminate” and called him “Elona Musk”. He then sarcastically offered Musk combat training. The Tesla boss posted the original and a translation to his Twitter. 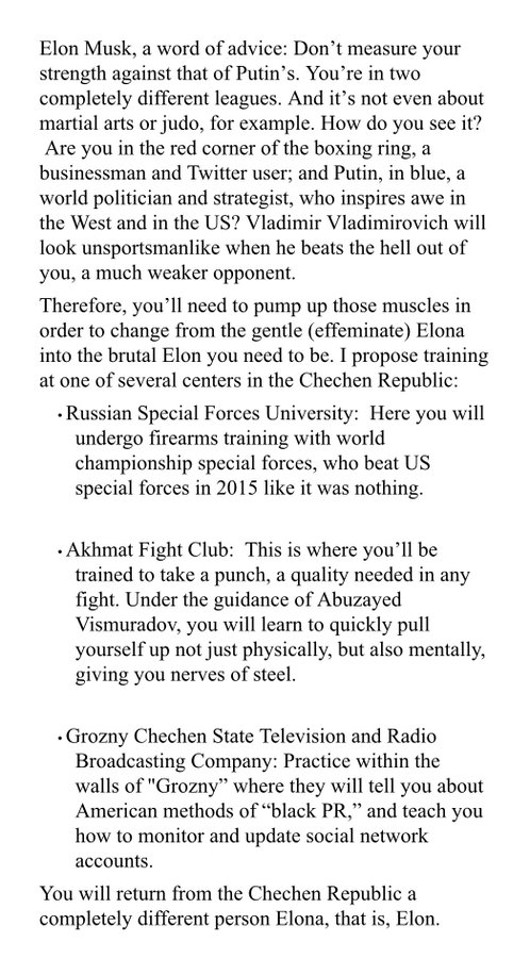 “Vladimir Vladimirovich [Putin’s middle name] will look unsportsmanlike when he beats the hell out of you, a much weaker opponent. Therefore you’ll need to pump up those muscles in order to change from the gentle (effeminate) Elona into the brutal Elon you need to be. I propose training at one of several centers in Chechen Republic.”

Kadyrov then went on to offer details about the training, including attending, “Russian Special Forces University: Here you will undergo firearms training with world championship special forces, who beat US special forces in 2015 like it was nothing.”

Then he would send Musk to “Akhmat Fight Club: This is where you’ll be trained to take a punch, a quality needed in any fight. Under the guidance of Abuzayed Vismuradov, you will learn to quickly pull yourself up not just physically, but also mentally, giving you nerves of steel.”

Vismuradov, one of Kadyrov’s loyal henchmen, faced US Treasury sanctions in 2019 for the specific role he played in the country’s persecution of gay people.

Kadyrov also said Musk needed to take some lessons in “American methods of ‘black PR’, and teach you how to monitor and update social media accounts. You will return from the Chechen Republic a completely different person Elona, that is, Elon.”

Musk responded by changing his Twitter name to Elona Musk.

In a further tweet, Musk shot back, “Thank you for the offer, but such excellent training would give me too much of an advantage. If he is afraid to fight, I will agree to use only my left hand and I am not even left-handed. Elona.”

At the time of writing, that tweet has had almost a quarter of a million likes and over ten thousand comments.

I think you’re putting Tesla owners at a risk, if Russia hacks into Tesla software and cause car crashes, this could be bad

Meanwhile .. behind the “Walls of Grozny” pic.twitter.com/kcQzhfXz5a