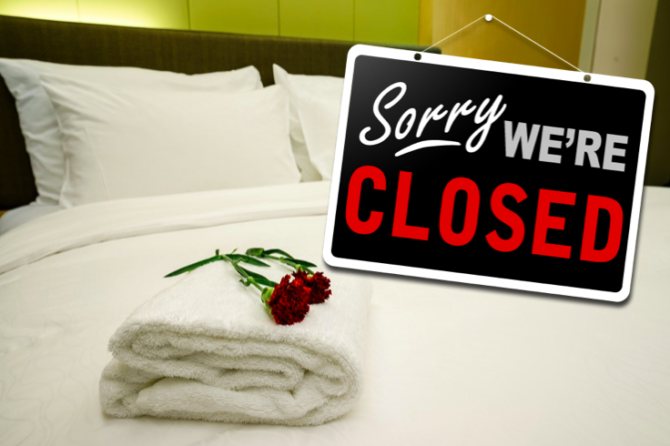 Thomas, a 31-year-old Polish artist I met in Kraków, opted for the latter when he re-entered the sexual world after months of celibacy. Unfortunately, getting off by bottoming for an old flame didn’t get him much satisfaction.

“I felt like I’d been raped,” Thomas said to me as he recounted the encounter. “It’s hard to explain. It wasn’t rape. It was consensual, but I still felt powerless and used.”

Part of it, he explained, was taking the submissive role. Although it hadn’t made him uncomfortable in the past, this time it left him feeling particularly vulnerable. More un-empowering, though, was the complete absence of emotional connection, a numbness that exacerbated the effect of his physical position.

Would he have been better off keeping his clothes on and sticking to kissing and cuddling?

I can’t say I’ve ever had a post-coital reaction as extreme as Thomas’s, but I could relate to what he told me. I often have felt somewhat icky and used at the end of sexual encounters–even those with not-so-strangers–like I was merely a body, not a person, to the other guy.

Usually, I don’t blame him. I’ve had my share of pushy partners, but every decision I’ve ever made in bed ultimately has been my own. To screw or not to screw, that is the question, and how I choose to answer it is all on me.

I know that ambivalence is typically a given with casual consensual sex. What’s love–or even just genuine affection–got to do with it? I’ve learned to accept that. But after decades of settling when I am in between boyfriends, and after more than five years single, I’ve ended up in the throes of sexual ennui. I became so tired of going through the motions in bed and on couches that I’m now flirting with celibacy myself.

My recent boundaries–kissing and cuddling with my clothes on–don’t always go over so well on Grindr. The apps have made hooking up so easy, raising everyone’s expectations. We approach each other with laundry lists of requirements and must-do’s that we didn’t carry with us into bars and clubs a decade ago.

As I told Thomas, I was never asked “Top or bottom?” by a guy with my clothes on until my first time on a gay dating site (Gaydar, back in the day). As long as there are gay men who continue to view sex with people they meet online and off as “transactional” (which was how a married friend once described his extramarital hook-ups, mostly arranged via Grindr), some of us will feel ripped off. If we’re looking for more than our “money’s worth,” even just a trace of tenderness, we might end up feeling cheated… or used… or, in cases as extreme as Thomas’s, raped.

Has the Grindr age of transactional sex, where instant gratification is literally at our fingertips and the sex script is often written before the first meeting, left some of us wanting a different kind of more?

How many of us have been hooking up and going further than we’d like to because we’re starved for real affection and hope to stumble upon it by accident?

Side-eye and resistance sometimes come my way when I announce, “No sex,” but I’ve been surprised by how many gay men are looking for the same thing: more from less.

My most sensual and satisfying recent dates–like the one I had with Thomas–have begun with smart conversation and ended with kissing and cuddling only. Our clothes stay on, and no-one says goodbye feeling used, or raped.

I’m ashamed to admit it, but I think the reason why sex was leaving me largely unsatisfied was because I was behaving like a virgin in high school who sleeps with her first boyfriend because she thinks that’s the only way to keep him interested. Sometimes I’ve been so hungry for more than just a human touch that I’ve made concessions, hoping to also make a human connection.

The kissing and touching lift me higher and higher until we both fall into familiar roles: His hand ends up on my crotch, and he fumbles with my zipper, while I resist initially, only to give in eventually. I know I’ll probably never see him again either way, but for that moment, I’m so caught up in the pleasure of his non-platonic company that I let him have his way.

Sometimes I’m resentful afterwards. Why do so many gay men seem to think we can only connect with our clothes off? But recently, I’ve had enough dates with guys who were OK with not going all the way and still wanted to see me again to make me rethink my common assumptions.

I’ve logged days, weeks, and months in 20 European countries since October of 2017, and I’ve gone out with dozens of men I met through Grindr and everyday life. The ones I’m still in touch with–the ones who’ve taken me on tours through their cities and continue to check in from time to time–are mostly the ones with whom I didn’t have sex.

So while I may still lose some (all those one-track-minded “Fun?” and “Looking?” boys), for now, less is giving me so much more.