A few weeks ago we didn’t know who Jake Tapper was (we don’t watch a lot of CNN unless we’re waiting on a delayed flight), but after a particularly testy interview with Trump’s propaganda minister Kellyanne Conway, he is suddenly everywhere.

And everyone wants to know how it felt to finally put a few dents in Kellyanne’s polished veneer of otherworldly truth-dodging.

Appearing on Conan earlier this week, Tapper said, “It was an interesting interview, and to my boss’ credit, he just said, ‘keep going, blow out the commercials, let’s just keep going.'”

“It was a day where President Trump had said that the murder rate was the highest it had been in 47 years, and that’s just not true,” he continued. “It’s just false.” Tapper also pointed to Trump’s statements that the “media doesn’t cover terrorism anymore” as the context that led him to press Conway as hard as he did.

Letting the sheer absurdity of that sink in a moment, Tapper made a face we’ve been getting very used to seeing lately: 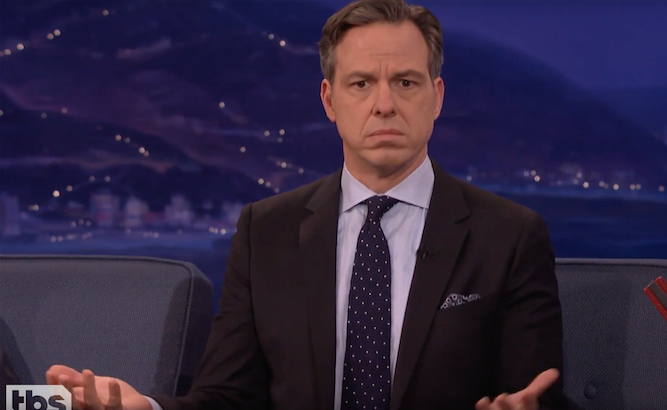 “That was a moment I really did feel like we’d gone through a time warp,” Conan responded, “where she was conceding, ‘Yes, he does lie, he says things that aren’t true, but also you’re not paying enough attention to the things he does say that are true.’ And you felt like that was a massive admission, that we’d crossed some kind of weird line that we had never crossed before.”

And now we know how Alice felt.