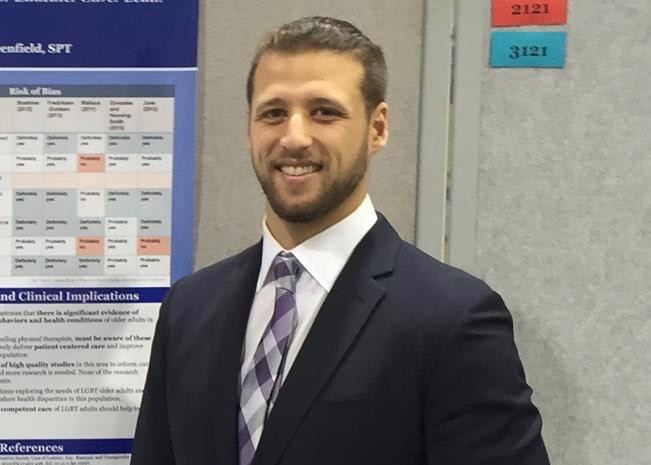 A former Penn State gymnast has written a powerful new essay for OutSports about his coming out experience.

“He had a way about him that made me want to earn his respect and show him my best self on and off the mat. He was a class act, an amazing motivational speaker, awesome leader and devote Christian.”

Greenfield attended Penn State from 2006 to 2010. Though he had come out to his family before starting college, he could never seem to work up the nerve to tell his teammates or Coach Randy.

“Being gay and a serious athlete at Penn State didn’t line up in my mind,” he says. “There were certain standards and expectations that came along with being on the Penn State gymnastics team.”

Deviating from the norm did not seem like an option, and the last thing that I would ever want to do was disappoint my team, my coach or my university. Being gay was just a part of me, but being a gymnast was my sole identity and I was not going to jeopardize my relationship with my teammates or my coach, as they were my family.

So he kept his sexuality a secret. He tried finding other gay men on Facebook and various dating sites, but never had much luck.

“Even though I still had gymnastics,” he says. “I was lonely and at a loss.”

Eventually, Greenfield says he “caved in” and told one of his closest teammates, a man named Allen, that he was bisexual. Allen was supportive, and over time, Greenfield was able to come out as gay to most of him team.

Yet for some reason he was never able to tell Coach Randy.

He eventually graduated, met and married his husband, Erik, got a job as an acrobat with Cirque du Soleil, and is now finishing up his Doctorate in physical therapy at Columbia University. He will graduate in May.

In 2015, Greenfield had an opportunity to finally come out to Randy.

“Penn State was hosting the Big Ten championships and many of my teammates and I came down for a gymnastics reunion,” he says. “Much had changed since college and I felt like a different person.”

I was also engaged to be married to Erik Zakrzewski and as we walked in to meet Randy, I was apprehensive. I had deja vu of the first time that I set foot at Rec Hall as a competitor in my freshman year in 2007. I was first up on the floor exercise and all eyes were on me. The announcer called my name and my heart was beating so hard I thought it would explode out of my chest.

As I stepped out onto the floor it was an out of body experience and I was on autopilot. To my surprise, I hit my routine and I heard my teammates and the crowd roar with enthusiasm. I ran right to Randy and he showed me a proud smile on his face filled with admiration. He stuck out his hand and gave me a firm handshake officially welcoming me to the team.

Like in that moment eight years earlier, when I finally introduced Randy to my finance, he took a look at me and then Erik, smiled with admiration on his face, and shook Erik’s hand welcoming him to the Penn State family. All my fears were for naught.

In addition to finishing up his Doctorate, Greenfield has used his platform to be an advocate for LGBTQ youth. Earlier this year, he released a video called “Love is Love” in response to the “mixed messages” on equality coming from the Trump administration.

“I wanted to give LGBT youths and athletes hope that we will fight for a country that loves and accepts them for who they are,” he says.

Check out the video.