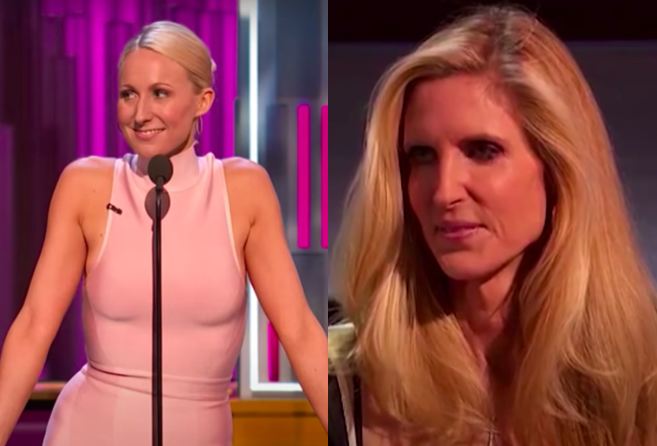 Comedian Nikki Glaser burst onto the comedy scene in 2016 when she turned the Comedy Central Roast of Rob Lowe into an unofficial roast of homophobe Ann Coulter instead.

In an appearance on this week’s episode of The Last Laugh podcast, Glaser reflected on that breakthrough performance five years ago and her feelings about Coulter today.

“She’s truly evil,” Glaser says. “And so I just went to a place of, like, I really want to go as hard on her as possible. Because for the first time at a roast, she really deserves it.”

Coulter has built her entire career on peddling bigotry and humiliating minority groups.

Oh, and she once famously told a gay man on a reality show that he should oppose abortion because “as soon as they find the gay gene, guess who the liberal yuppies are gonna start aborting?”

Speaking to The Last Laugh, Glaser says, “There’s rarely been someone there that is that loathed and deserving of being loathed and knows what they’re doing and has made a character that is evil on purpose because they’re a sad person inside.”

Glaser says there’s only one moment from that iconic evening that doesn’t sit well with her today. It was a joke she made about a Mexican one day digging Coulter’s grave.

“I didn’t like that I said ‘Mexican’,” she explains. “I look back on that joke and that’s making me someone who assumes that Mexicans dig graves, which I guess is a stereotypical thing that you could put in a joke.”

“But everyone loved that joke and was like, ‘That’s so mean to her!’ And I feel like that joke is more mean to Mexicans for no f*cking reason.”

She adds, “That joke is always quoted back to me. And I cringe when I hear it, because if I were Mexican, I would have been like, ‘This f*cking b*tch, we don’t need her to speak for us’.”

“It’s a great joke and it wasn’t written by me and I took it on right before I went on stage. I added it to my set because why not? But I already had that kind of spidey-sense of, like, this doesn’t feel good.”