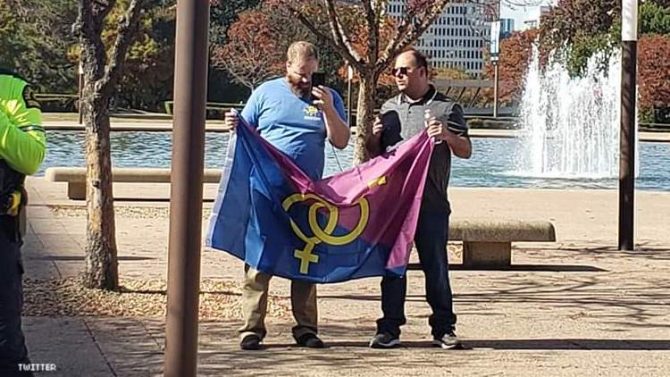 Following Boston’s “Straight Pride” parade back in August, the alt-right hate group Super Happy Fun America planned a second event in Dallas over the weekend. Organizers initially said 2,000 people were expected to participate. But it looks like were off by roughly, oh, 1,998 or so.

A “Straight Pride” rally was held outside Dallas City Hall Plaza last Saturday, where it attracted a whopping two attendees, neither of whom were actually from Dallas but instead flew in from Boston to attend the event.

A third person, a member of the alt-right hate group Proud Boys, showed up later in the afternoon, according to reports. And a fourth may have also wandered over at some point, though this hasn’t been confirmed and reports are conflicting.

Unfortunately for them, the two to four attendees were outnumbered by a group of 20 or so counter-protesters, who had to be kept at bay by police.

One of the straight Pride people yelled insults at the transgender attendees saying, “We know there are only two genders.” He also said, “I’m part of the oppressed majority.” When two of the protesters got too close to the Straight Pride crowd of two, police separated them, ending the arguing. Some individuals approached the the straight pride duo to talk, one at a time, which changed no one’s minds and prolonged the pair’s visit to City Hall Plaza.

Prior to the Dallas event, Modesto, California’s “Straight Pride” event had boasted the lowest turnout, with roughly 20 attendees, who were also outnumbered by counter-protesters.

Related: “Straight Pride” is coming to Texas, hopes to draw thousands of spectators