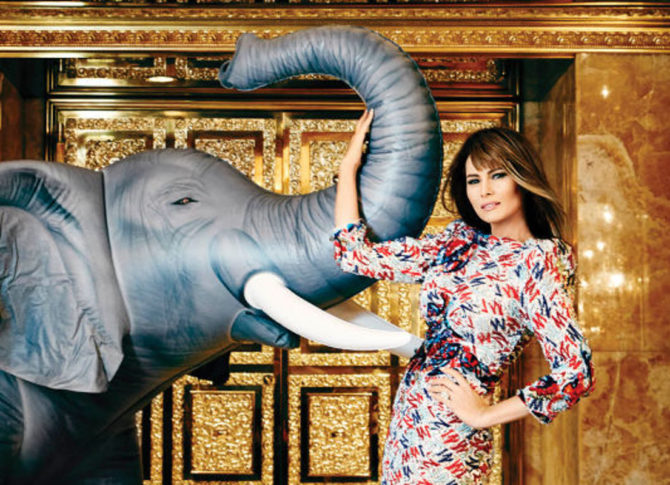 This just in: First Lady Melania Trump‘s favorability ratings are on the up and up, according to a recent CNN/ORC poll. Evidently, Americans are falling in love with their new first lady. We’re not convinced the feeling is mutual, however, but that’s another story.

In a new survey conducted March 1-4, 52% of respondents said their opinions of Melania Trump were “positive,” up 16 points from a CNN/ORC poll conducted back in January.

The jump is impressive considering that the only thing Melania has really done thus far is file a $150 million defamation lawsuits against a blogger and a media organization over false claims made during last year’s campaign that she once worked as an escort.

To date, Melania has made a grand total of one charitable appearance in her first month and a half as First Lady. It was a quick stop into a children’s hospital in New York, where she received a tepid response from the kids and didn’t even both to take off her coat while she was there.

Then there was the time she read the Lord’s Prayer before Donald Trump’s 2020 reelection campaign kickoff event 29 days into his first term.

Oh, and she’s written a total of 12 tweets, half of which are just photos of herself doing things like touring the Japanese gardens at the Morikami Museum in Florida or pretending to be interested in an exhibit at the Smithsonian National Museum of African American History.

So, yeah, we’re not entirely sure why so many people seem to think she’s doing such a great job, but there’s one person who definitely isn’t feeling her: Dan Savage.

On his podcast this week, Savage didn’t hold back when talking about why he can’t stand Michelle Obama’s successor:

“God knows there’s enough hate in the world and I don’t want to add to the sum total, but forgive me, I have got to get this off my chest: I f—ing hate Melania Trump,” Savage said.

“I’m not alone in loathing Donald Trump’s third wife–she’s married to a misogynist after all. Odds are good her husband hates her, too,” Savage continued. “But there are some folks on the left who not only don’t hate her, they view her as some sort of sympathetic figure. The pretty princess in the tower locked up by the orange ogre with the bad combover, a princess desperately blinking out distress signals during swearing-in ceremonies and inaugural balls.”

According to Savage, Melania is “as ugly on the inside as she is pretty on the outside.”

“She is a birther,” he said. “Pretty Melania went on TV to push the same racist conspiracy theories about Barack Obama that her husband did. She’s an immigrant who doesn’t give a sh*t about the plight of other immigrants. She’s famously a plagiarist. And she’s brought ruinous lawsuits against journalists and bloggers accusing them of among other things, potentially interfering with her ability to profit off her role as first lady.”

How do you feel about Melania Trump’s performance as first lady? Take our poll and share your thoughts in the comments below…