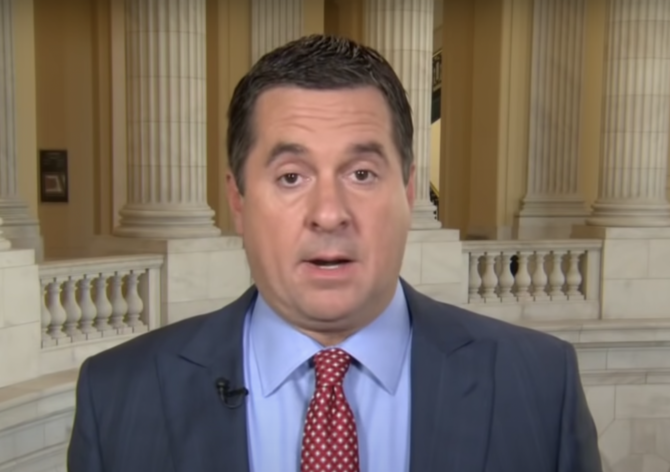 Antigay congressman and Trump asskisser Devin Nunes announced yesterday that he’s quitting his job in the House of Representatives and won’t be seeking reelection in 2022 because he got a better gig and doesn’t give AF about public service anymore.

Nunes says he’s “humbled and honored” to be named the CEO of ex-president Donald Trump’s crappy new social media venture, Truth Social, that hasn’t even launched yet and is already under investigation.

Trump says he has secured a $1 billion investment. But Truth Social is still a fledging company that has — in its short time in the public arena — put up some serious red flags. For one, it has missed its self-imposed deadline to put out a product. When it was first announced, the site was immediately targeted successfully by hackers. And on Monday, it was revealed in public filings that the SPAC taking it public is under investigation by the SEC and FINRA.

Nunes, who, before becoming a U.S. congressman, worked as a dairy farmer, will start his new gig as CEO next month, despite having zero experience in the tech industry or as an executive.

His abrupt departure should raise alarm bells for LGBTQ people since it means there’s going to be a lot of jockeying for the his powerful perch on the Ways and Means Committee, as well as his spot on the Intelligence Committee. And we all know when Republicans want attention, they often target marginalized communities, trying to out-hate one another to win favor with the base.

Related: Caitlyn Jenner flirts with the idea of running for president and this is why we can’t have nice things

Speaking of the base, Nunes’ departure also means there will likely be a special election to fill his seat representing California’s 22nd congressional district, which skews heavily Republican. This will not only cost taxpayers a ton of money, but it will probably bring out even more far-right wingnuts and homophobes vying for his job. So, get ready for that!

In 2019, Nunes attempted to sue a fictional cow for $250 million after a Republican strategist and the owners of @DevinCow and another parody account under the name of Nunes’ mother made fun of him on Twitter. The defamation suit was dismissed in June 2020.

Interviewer: We see you have zero experience working at a social media firm. Do you have experience using these platforms?

Devin Nunes: Yes, I’ve unsuccessfully sued a cow account and a parody of my own mother

Devin Nunes will be shaving his face in an airport restaurant by the end of 2022.

Devin Nunes leaving Congress in 2022 and won't seek reelection. Trump was so impressed with Nunes' online battle with a cow, he made him CEO of his media organization ?#Truth2Voice

Devin Nunes is MOOVING on to a Trump social media network that is already under SEC investigation.

How long before Devin Nunes gets fired by Trump, and has to chase him for back wages? I give it a month. Tops.

I wonder if Devin Nunes will have free range at Trump’s media company or if he will be pasteurized. @DevinNunes

Devin Nunes has no experience in media and spends most of his time spouting nonsensical rhetoric and misinformation…so that makes him a perfect fit to lead Trump’s media company.

I’m udderly thrilled that Devin Nunes is retiring. How about you? ?