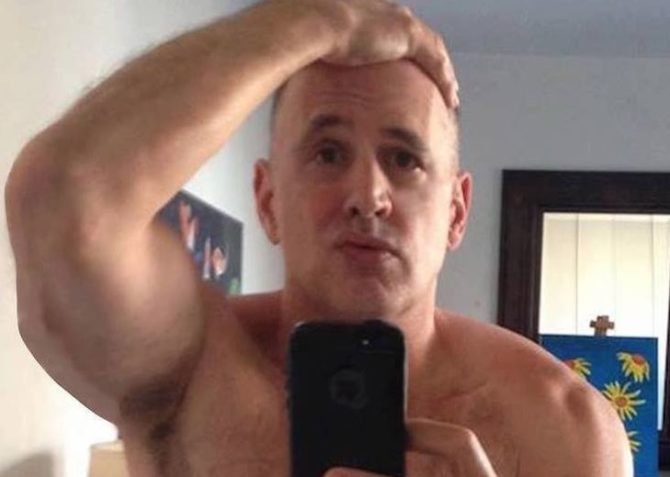 David Toussaint is a 53-year-old writer from New York. He is the author of four books and is a former editor at Conde Nast. His work has appeared in Instinct magazine and the Huffington Post, among many other sites and publications.

Related: Turning 50 was the best thing that ever happened to this DILF’s dating game

David writes about everything from sex and dating to agism and slut-shaming in the gay community, all through the lens of a daddy.

We had a chance to interview him about those things and more. Check out what he had to say…

You recently wrote an op-ed about how turning 50 and becoming a “daddy” was kind of the best thing to ever happen to your dating life.

I’m a late “hot” bloomer. It hit me the day that I had two men ask me out in an hour’s time, and they were both beautiful and sweet. That happened to my straight friends in high school. When I came to New York, in my 20s, it never happened. I’m not saying that to brag, but to explain the experience. I never would have anticipated this kind of attraction 20 years ago. The same men who would have ignored me 20 years ago ask me out a lot. Why do they want me now? I don’t know. But I wanted other people to know this so they realize that attractiveness can extend beyond 50.

Did you ever think you would wake up one day and suddenly be a “daddy”?

The first time I was called a “daddy” I was 37—he was 27. I explained to him that I was only ten years old than him, and then I realized it was more a state of mind than actual age issue. I grew to like the phrase, in huge part because I have always been attracted to older men myself. I didn’t have a dad growing up, either, so it’s flattering that someone sees me in that image. I like to take care of men, emotionally. I like to make them feel loved. I’m very protective of men I date. Perhaps that’s all the label means. I don’t play games with men. But, I have to add, of course I never expected I would be called this because when I was young all I thought about was getting AIDS. No one ever really paid attention to life after 50. We paid attention to life after the end of the year.

Would you say the guys who are suddenly interested in you are primarily looking for sex, a relationship, or both?

Sex first. That’s the Grindr era at work. We all flip out our phones and get those bings for immediate gratification. But I get asked out too. The reason why it’s less is the percentage of gay men my age are already in relationships, perhaps open, but relationships nonetheless. Young guys are afraid to ask me out. Many men my age who are single are very jaded because of past relationships and that makes me very sad. Of course, I do want to meet Prince Charming. I’ve never given up that dream.

Why do you think so many gay guys in their 20s, 30s, and even into 40s fear the idea of getting older?

I think gay men fear getting older and of being left alone. For the younger generation it’s probably different because they’re getting married and having kids and building families. We didn’t do that. We didn’t have that opportunity. If you’re not the most beautiful man in the world at the age of 30, be happy! For beautiful men (and women), I often think getting older is much harder because that thing that defined them—their face—is no longer gong to sell them. So, if you do look like Channing Tatum, make sure you have a personality to fall back on because you’re going to need it eventually. And personalities are far more sexy than biceps.

What is the rudest thing anyone has ever said to you about your age?

Someone called me gramps once, and it was said just to be mean and catty. It was a guy at a bar. I said “thanks for making my day,” and laughed. But it hurt. The quandary today is that, as has often been reported, young men either love dating and having sex with older men, or they’re insulted if you look their way. But when I was younger men were much crueler to me when they rejected me, so perhaps there is some respect for your elders thing going on. I hope so.

You also wrote an op-ed about slut shaming in the gay community, and about how so many gay guys look down upon men who aren’t in committed monogamous relationships.

When I read the comments it was as if I’d said beastiality and necrophilia and gang-rape were OK. And all I’d written was that casual sex can be great. Gay men, in many respects, are starting anew. With that we’ve almost developed a 1950s mentality, in which you date a few times, meet the right man, get married, and have kids. Period. The end. That’s fine, but it’s not exactly practical for everyone. Its complete 180 from the ’70’s, when men did the opposite. Then AIDS happened, and men started being more relationship-oriented. Then gay marriage happened, and we got even more relationship oriented. But the whole judgement thing has got to go.

Whenever I hear a gay man put down another gay man for having causal sex I’m reminded of what the straight guys in high school would say about girls who “slept around.” Whores, easy, place to get STDS, etc. We love to feel superior to others in this world. Sometimes a young guy will say I must have “missed the boat because I’m single,” and I want to say, “You do realize that when I was your age there was no boat. And how do you know my boat didn’t die of AIDS”? It’s very ignorant behavior. Haven’t we had enough people beat up on us so that we don’t want to repeat the pattern?

There’s nothing wrong with being a slut!

Let’s admit it: Sex is hard to resist. Everyone knows that. I’m not gonna freak out if I have sex with you unexpectedly and then see you the next day at the gym. When I was a kid, that was always so awkward. Now I realize it’s just sex. Apps have made supply and demand more obvious too.

I write a lot about sex, not because I know a lot about it, but because I don’t know a lot about it. It’s one of the most frustrating, confusing, complicated things humans face. And we are not particularly evolved in the area. We’re rather screwed up, sexually. And that’s from 2,000 years of Christian suppression. Sex is everywhere. Everywhere. We need to admit that, accept it, and work from that angle.

Related: Back that ish up: This guy is not here for your petty slut shaming