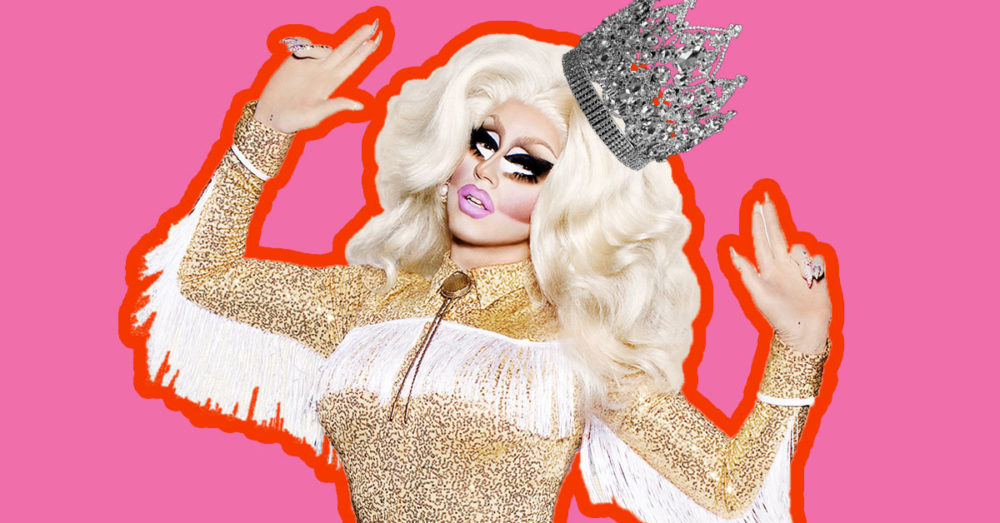 RuPaul’s Drag Race has grown into a phenomenon, which has fast-tracked the careers of more than 100 drag queens over the past decade. At the helm of it all, RuPaul has carved out a nice little piece of the cultural pie, snatching up Emmys along the way. With VH1 now beaming the show to more homes across the country than ever before, the fandom continues to become more passionate every day.

You definitely would have been able to feel that passion in person last night if you happened across a gay bar between 8 and 9pm. People representing every part of the LGBTQ spectrum, including allies, flocked to their local gay bar to watch Trixie Mattel (aka Brian Firkus) snag the Hall of Fame crown during the finale of RuPaul’s Drag Race All Stars season 3. The episode was everything a reality competition show should be: Dramatic, suspenseful, hilarious and filled with dozens of GIF-able reactions and one-liners, like this one:

To help celebrate her big win, Queerty reporter Tim Winfred chatted with Trixie Mattel to get the inside scoop on her biggest dreams in life, why she doesn’t care if she’s not everyone’s cup of tea, and learns about her new auto parts line coming to an O’Reilly Auto Parts near you! Read the full interview below.

Queerty: As we speak, RuPaul is getting a star on the Hollywood Walk of fame.

Trixie: I know! I wish I could be there.

It’s crazy! It honestly makes the little gay boy in me feel like Drag Race has brought us to an era where anything is possible.

Like RuPaul says: “We’re all born naked and the rest is hand prints on Hollywood Boulevard.” That’s how the saying goes, right?

[Laughs] Exactly! So, if absolutely no dream were too big to accomplish in your lifetime, what would be the biggest thing you would dream of accomplishing as either Trixie or Brian?

Speak it into existence: I would love to be nominated for a real music award, like an Americana Music Award or a Grammy or something like that. That would be really cool.

Yass! That would be amazing, especially with the excitement of your new album One Stone hitting the top of the iTunes album chart.

We spoke years ago, after you were eliminated from Drag Race season 7, and at that time you told me you didn’t want to release music. What changed?

I guess I underestimated my audience’s willingness to go with me on that journey. I was afraid that people saw Trixie as this comedian Barbie, but they wouldn’t be able to see Trixie also as a folk musician. They really showed me I was wrong.

I write music for my own human development, so to share it with people is an extra step. And, it turns out it’s really fun.

Music really is poetry at the end of the day.

Yeah, I don’t write it to make money off of it. I write it and then decide that maybe other people would actually want to hear it, you know?

One of the questions RuPaul asks the winners during the final main stage presentation of regulars season is about what they would go back in time and tell themselves at a young age. So, if you could talk to 5-year-old Brian as who you are now, what would you say to him?

[Laughs] I would be like, “Gurl, you’re gay!” [Laughs] You are so gay. But you’re going to figure out a way to monetize it and it’s going to be so fierce.

Also, I would have said, “You’re going to start to play guitar at 13, so why don’t you start now and get a jump on it? If you do, you could be really good.”

I know that’s not the best answer and you probably want me to cry, but I don’t have any regrets or anything. I love my life so much right now that I wouldn’t change a single thing leading up to this moment. This is the recipe.

When you’re 5 but you’re going to be fierce.

OK, so really quickly I want to talk about something that’s been really upsetting to me over the past several years as Drag Race has grown. As fans become more and more passionate, contestants are being attacked online every day, even to the extent of receiving death threats. What message of positivity do you have for fans out there who feel the need to spread such negativity?

Drag Race is all about critiquing and being critical. It’s all about sitting at home on your couch or in a bar and turning to your friend and saying, “I love that! Don’t you love it?” or “I thought that could have been better.” I guess the disconnect is that we all have different ideas of what good drag and bad drag is.

I got an email today, to my official booking email, that told me that I didn’t deserve anything, that I robbed Shangela.

There’s that old saying: “Opinions are like ass holes: Everyone’s got one (and most of the time they stink).”

[Laughs] And you should bleach them.

[Serious] Well, I drink enough bleach that I think on the way out it comes out cleaner.

Negative comments just don’t affect me that much. I make strong choices in drag that some days aren’t even the judges’ cup of tea, clearly! Even Adam Lambert doesn’t think I’m funny.

I’m used to people being one way or the other on me, and I’ve known this day was coming for a year, so I’ve had time to think about how people might feel about the ending.

I have my opinions too, you know? Bob The Drag Queen is one of my best friends, but when I watched Drag Race season 8, I was team Kim Chi. So, to quote Alyssa Edwards, one of the greats: “It’s not personal, it’s drag.”

Ok, so let’s switch things up a bit and get political: If you could sit down in a quick interview with Donald Trump and ask him up to three questions, what would you ask?

Oh my god, it would be a quick interview because I don’t think I would waste my time. There are just some people who are too far gone to have any sort of conversation with. I don’t think you could change their minds. Some people have been baked and marinated in what’s right and what’s wrong, and I just don’t think you can scrub that off.

It’s sad how partisan the world has become on so many topics.

There’s no changing the mind of someone like Trump. I mean, he’s not like he is because nobody’s ever tried to tell him he’s wrong. If he isn’t listening to so many people telling him he’s wrong, why would he listen to me?

But you’re the next Drag Superstar, goddamnit! [Laughs]

Oh yeah, I mean that probably doesn’t hold a lot of weight with him. [Laughs]

My next question comes from a Drag Race super fan named Braden Chapman, aka Mimi Imfurst.

Braden told me, with no additional context, to very specifically ask you: “What happens at 7:15pm?”

[Howls with Laughter] This is an iconic line delivered by Alyssa Edwards. We were on tour and Alyssa was getting ready, so she’s wrapped in a towel with a face mask on and this meeting was going long. She gets all in her Alyssa Edwards regalia out of drag, still in a towel and a face mask, and she says, “It’s 7:15, what’s the tea?” meaning, “I got to go get ready.” It was so iconic for her to look like she did and be like, “We gotta go!”

Is that what Queerty readers like, inside jokes from four years ago? [Laughs]

To wrap things up, I want to know what you’re up to next, but let’s switch it up a bit. Can you tell me about something you’re possibly thinking about doing next, even if it’s just a teeny tiny idea that you thought of in the last day or so, that you haven’t told anybody else about yet?

Oh, in a dramatic turn of events, I might try something that I’ve never done before: I might have a cocktail. I might reward myself with just a little nip, you know? Should I be bad, should it be my cheat day?

Wait, wait wait. Did you just say you want to create signature “auto parts” for cars?

Did you really just think that I was going to market a line of auto parts? [Laughs]

Alright, well thank you so much for your time today, Trixie. I can’t wait to see what’s next for you.

Oh, thank you! And thank you so much for really supporting everybody. It was a really difficult, tight race, and it could have been any of us, so thank you.