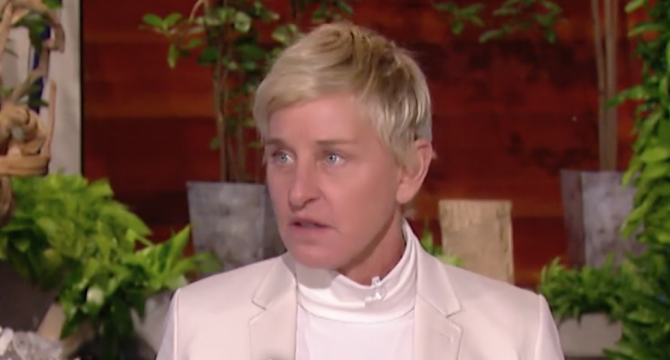 Ellen DeGeneres announced yesterday that the upcoming 19th season of her once-hit daytime talk show will be her last, claiming the show is “just not a challenge anymore” and she’s moving on. Now, in a sit-down interview with Savanah Guthrie of Today, she’s finally addressing her summer of scandal last year that included allegations of a toxic workplace, bullying, and harassment.

In the interview, which aired this morning, DeGeneres said she’s still surprised by the onslaught of attacks she received and rumors of her show’s toxic environment, but she insisted that’s not the reason behind her decision to call it quits.

She added, “And you know, people get picked on, but for four months straight for me, and then for me to read in the press about a toxic work environment when all I have ever heard from every guest that comes on the show is what a happy atmosphere this is and what a happy place it is.”

But DeGeneres also told Guthrie that “if it was why I was quitting, I would have not come back this year. I really did think about not coming back. It was devastating. I am a kind person. I am a person who likes to make people happy.”

“If it was why I was quitting, I would have not come back this year. I really did think about not coming back because it was devastating.” -Ellen DeGeneres on the claims of a toxic workplace at her talk show pic.twitter.com/i3LMY3XycD

She also denied having any knowledge of her show’s toxic work environment prior to the reports last summer.

“I had no idea, never saw anything that would even point to that,” she said. When Guthrie pushed back and said there are probably a lot of people who won’t believe that, DeGenres replied, “I don’t know how I could have known when there is 255 employees here, and there are a lot of different buildings, unless I literally stayed here until the last people goes home at night.”

She added that she wishes “somebody would have come to me and said, ‘Hey, there is something that you should know about.'”

Did you feel like you were being canceled? –@SavannahGuthrie

DeGeneres also revealed that she worked “really hard” with a therapist to help make sense of the attacks being lodged against her and ultimately concluded that her gender played a role in how she was being treated.

“I have to say — if nobody else was saying it — it was really interesting because I’m a woman, and it did feel very misogynistic.”

“I am not bulletproof, and no I do not have a thick skin,” she added. “I am extremely sensitive, to the point where it is not healthy how sensitive I am. When something is coming back at me that I know is not true, I guess I could take one or two of those shots, but four months in a row took a toll on me.”