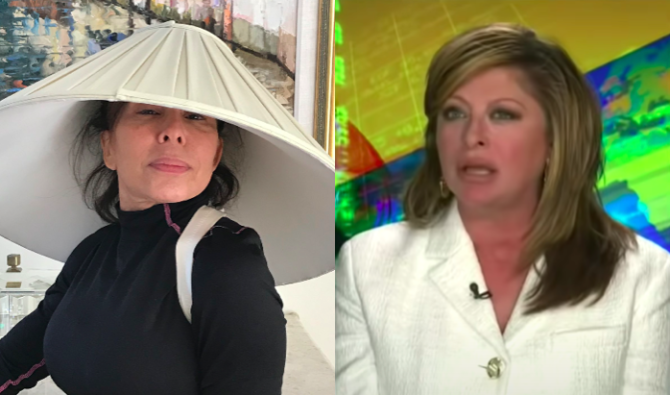 The anchorwoman was trending all day on Twitter on Sunday after she defended her reporting, psychotically telling critics, “Keep trashing me, I’ll keep telling the truth!”

It all started when she invited Sen. Ron Johnson onto the show to talk about a number of right wing hot topics, including Hunter Biden’s laptop, whether COVID-19 leaked from a Chinese lab, and the January 6 attack on the U.S. Capitol.

“Armed insurrection is what Nancy Pelosi keeps calling January 6,” Bartiromo scoffed. “Senator, how many guns were actually taken up on that day, since she says it was armed?”

To which the antigay senator from Wisconsin replied, “I asked the FBI witness. Not one! Not one gun was recovered either in the Capitol or on the Capitol grounds according to that FBI witness, so that’s just one of the latest big lies.”

Earlier this year, Johnson received a “pants on fire” rating from Politifact after he lied and said the attack on the Capitol building was not an armed insurrection:

Police stopped only a fraction of the violent protestors Jan. 6, but we still know of guns and explosives seized in and around the Capitol. And we know rioters brought knives, brass knuckles a stun gun, and other weapons. Just as notable, video plainly shows the mob using all manner of makeshift weapons to attack police and force their way in, including hockey sticks, flagpoles, fire extinguishers, and a police shield stolen from an officer.

And a fact check from USA Today in March also found that the Department of Justice has pressed gun charges on at least three people connected to insurrection, including one who was allegedly found in possession of a loaded handgun and an extra magazine.

Later in the segment, Bartiromo presented Johnson with a laundry list of what she called “the biggest lies of all” being circulated among Democrats. On the list was the January 6 attack being qualified as an “armed insurrection.”

Bartiromo said she was “so incredibly proud” of her team for “telling every story.”

“We’ve been on the right side of it for seven years going,” she falsely stated. “I’ve been trashed every day along the way. Keep trashing me, I’ll keep telling the truth!”

This, of course, is another lie.

Bartiromo is currently fighting off a lawsuit by voting technology company Smartmatic, in which she accused of causing grievous harm the company by falsely stating it was involved in widespread election fraud.

Maria Bartiromo is three whiskey sours away from her final form of Jeanine Pirro. pic.twitter.com/v3NEWxuGpM

Maybe Maria Bartiromo would get trashed less if she didn’t spew hot garbage at us.

this woman clearly snapped. i watched her do the business reporting at CNBC and she showed no sign of this type of extreme behavior..wow…

Maria Bartiromo is just Jeanine Pirro without the drinking problem.