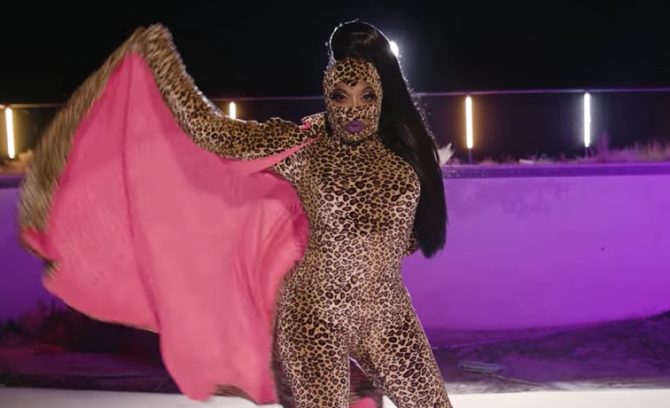 Whatever your feelings are about how Drag Race All-Stars season 3 ended, there is one unimpeachable truth that came out of the show: BeBe Zahara Benet channeled pure divination as “Jungle Kitty.”

If you’ll recall, even the other competing queens thought Bebe was way out in left field during rehearsals for the “Drag Up Your Life” number, but the finished product spoke for itself and “Rrrrra-ka-ta-ti-ti-ta” was etched into the Drag Race hall of slayage.

See it below beginning at the 4:04 mark:

So it is with excitement that we’re the first to announce that Benet is resurrecting the Jungle Kitty for a new song, and Queerty has an exclusive first look.

Related: How Bebe Zahara Benet starred not one but twice on ‘Drag Race’

“Jungle Kitty” is the first single off her as-yet-untitled new album, coming later in 2018.

The video, which trades in camp for grit, was directed by Assaad Yacoub and produced by Producer Entertainment Group. Her male co-star is played by model and stuntman Sergei Sheza. While it’s unclear in the teaser, we hear the story finds Bebe with an excellent reason for fighting back against the video’s villain. This kitty most certainly has claws.

It’ll be released worldwide this Friday, May 25 on BeBe’s VEVO channel.

See the teaser below: