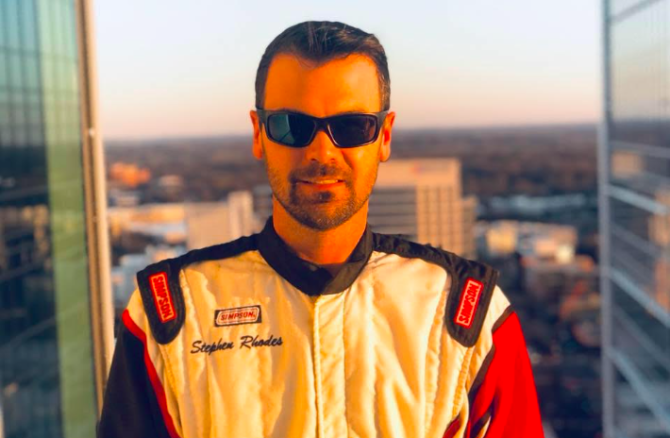 In 1992, at the age of 8, Stephen Rhodes climbed behind the wheel of a go-kart and started to drive. Little did he know that, several years later, that same little boy with a fondness for wheels would eventually grow up to become the first openly gay NASCAR driver.

However, Rhodes notes, holding such a title hasn’t been a complete joy ride. After all, Rhodes came out in 2001, a time he says was “a combination of both good and bad.” Despite the struggle, Rhodes was able to work his way up the ranks of the racing world, most notably when he joined the NASCAR Camping World Truck Series (NCWTS) in 2003.

Of course, a lot has happened in that time. Queerty recently chatted with Rhodes to discuss all things racing, what pressures come with being called the first openly gay NASCAR driver, and whether NASCAR, both as a sport and its fans, was always accepting of his sexuality.

QUEERTY: You’ve been hailed as the first openly gay NASCAR driver. Does the weight of that ever get to you? How does it feel to be the first?

RHODES: Not yet, and I don’t see that changing. I’ve always felt I had the heart and guts to be an example that not only helps others, but clears a path for anyone like me to achieve their goals.

The feeling of being the first openly gay NASCAR driver is incredible. I don’t know how big or small the reality of it actually is, but all I can do is hold the title and continue to make a positive change in society. It not only sets the tone for what can be done [in the name of progress], but it also shows other LGBTQ people in the same industry, or similar ones, that there’s nothing to be afraid of.

You came out early on in your career, while you were still racing. What was that experience like? I imagine it was a much different environment back then.

I came out in 2001 when I was 17, which happens to be the same year I entered the higher ranks of NASCAR. Honestly, it was a combination of good and bad. In my mind, I knew life was changing for me (and others like me) for the better. The bad during that time was dealing with family and friends, the ones that didn’t support me, that didn’t agree or accept it. Times were very different, but somehow, 2001 will go down as the worst and best year of my life.

Do you think your experience would have been different had you come out today?

Honestly, it’s difficult to say. If I were just now starting in NASCAR as an openly gay man, I think the overall reception would certainly be more welcoming. The increased acceptance we see across society today has been a difficult battle fought by the LGBTQ community that came before us, who were brave enough to live each day as openly gay. This, of course, is an ongoing battle, but I’m happy to be playing my part in challenging society’s expectations of a gay man.

How has your welcoming into the NASCAR world been with the fans? My friend loves it, but mentioned it is predominantly a southern sport, where not everyone is, shall we say, accepting of the LGBTQ community.

NASCAR has historically been a southern sport as its origination comes from Southeastern United States, but NASCAR has actually expanded into locations and demographics of which many people are unaware.

The great thing about NASCAR fans is that they are fans of good drivers, regardless of those drivers’ personal lives. I’m sure there are many individuals (not only NASCAR fans) who dislike me simply for being gay. However, I’ve actually gained many fans by being open about being gay, and have had countless members of the LGBTQ community tell me about how I’ve helped them overcome obstacles by simply being open in every aspect of my life.

Put simply, some people love me for being openly gay in NASCAR; some people probably hate me for it. But honestly, most NASCAR fans don’t care either way, as long as it doesn’t affect my ability to drive.

I read an old article about you recently that begged the question, “Is NASCAR ready for the first openly gay driver?” and it just reminded me how far we’ve come. Do you feel times have changed since then?

Many comments [on articles such as those] point out that people unfamiliar with NASCAR assume that NASCAR fans must be homophobic rednecks, which couldn’t be further from the truth. Society’s acceptance for the LGBTQ community has certainly improved since I first started driving in NASCAR, as has NASCAR’s.

In both NASCAR and society as a whole, there is certainly much more progress to be made. What matters most going forward is that each of us is brave enough to be open and honest about who we are, especially in difficult situations. We all face prejudice and ignorance, which can only be changed by challenging people’s expectations and assumptions.

Have you ever had a particularly bad experience because of your sexuality?

My one and only bad experience, and admittedly it wasn’t bad, was having someone at a race wave a hot dog around every time I’d go by. I’ll never forget how I lead every lap, won the race, and couldn’t help but laugh inside at him and [whatever driver] he was pulling for because they didn’t [win] first.

What a wonderful time we had in South Florida escaping the hurricane. Definitely will be back soon! #southflorida #palmbeach #florida #vacation #traveler #sun #fun @pbpost @eaupalmbeach #nascar #stephenrhodes #ncwts

The last we heard from you professionally was when you took part in the NASCAR Camping World Truck Series in 2003. What have you been doing in that time?

My last NASCAR Camping World Truck Series Race was in 2003, but my career didn’t end there. After two races, I discovered the team I was running for lacked the resources needed to be competitive, and I didn’t want to ruin my reputation, so I went back a few levels down to the NASCAR Late Model Stock Series, where I continued racing until 2012. Since my break I lived in [several different places], trying to discover other sides of life [outside of racing] to see if anything fits. It hasn’t, so I’m returning to what I know and love.

Where you hoping to go from here, in terms of your future with racing?

Earlier this year I moved to Charlotte, North Carolina. My goal is to secure a ride for the 2019 or 2020 season in the NASCAR Camping World Truck Series, and spend a few years there before moving up to the NASCAR Xfinity Series.

Life on the road is me time…..and I get a lot of it! #StephenRhodes #life #traveler #NASCAR

Do you consider yourself an advocate for the LGBTQ community?

I do consider myself an advocate for the gay community. Admittedly, it’s been hard to do with some issues [around a previous relationship that recently ended], but I’m already feeling the energy to get back out there, and to be a strong, confident, talented spokesperson for our community. It’s absolutely important to me. I have a platform that not many have to make changes, inform, and show our community in a positive light.

Finally, I’m supposed to ask from one of my NASCAR fan friends: Do making all those left turns ever make you dizzy?

One double vodka and cranberry makes me dizzier than any amount of left turns I’ve made in a single race!