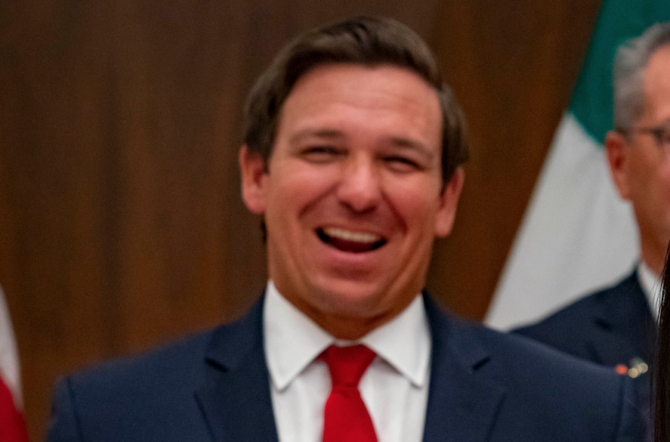 Florida’s Parental Rights in Education bill, or the so-called Don’t Say Gay bill, was signed into law by Gov. Ron DeSantis (above) in March. It went into effect on July 1 and some public school districts are already rolling out dangerous new policies.

Proponents of the bill claimed its purpose was to shield young students from conversations about LGBTQ topics deemed “not age-appropriate or developmentally appropriate.” Many argued the sole focus would be to limit early sex education. Critics condemned the vague language (not to mention the entire premise itself), fearing a door would open for varying interpretations that would directly harm LGBTQ students.

Those fears were confirmed when news broke last week that one district was instructing teachers to remove signage indicating a classroom is a “safe space” for LGBTQ students. They were also told to take down photos of their families if they have a same-sex spouse, remove any rainbow flags or stickers, and “report to parents if a student ‘comes out’ to them.”

Now, the Leon County School Board is taking it a step further after passing its deceptively-named LGBTQ Inclusive School Guide.

One of the policies that’s being widely condemned on social media requires the school to inform all parents if a student who is “open about their gender identity” is in a P.E. class or on an overnight school trip.

The guidelines read: “Upon notification or determination of a student who is open about their gender identity, parents of the affected students will be notified of reasonable accommodation options available.”

The board voted to approve the guide unanimously 4-0.

Oddly, the policy also contradicts itself and states that a student’s sexual orientation, gender identity or expression “should not be shared with others without their input and permission.” That’s going to be tough to stick to once those all-parent notices go out.

Kailey Sandell, a student at Leon High School, told the board at a meeting: “The notification to all the parents can create a very stressful and unwanted situation to trans and LGBTQ students. A lot of times kids assume that kids are gay or trans; they will easily be able to hurt them.”

More than a dozen other states including Ohio and Louisiana have introduced legislation that mimics Florida’s law.

Here’s how folks are responding to these early signs of trouble:

Leon County School District in Florida just passed an LGBTQ guide that notifies ALL parents if a student who is open about their gender identity is in their kid’s PE class or extra curricular activity.

One assumes it’s so their kids don’t catch it. ?https://t.co/IQAhhPOmj9 pic.twitter.com/GJxZAsMhh8

Florida is an insane place. Imagine these parents thinking they deserve a notification everytime an LGBTQ student is in their child’s PE class or field trip. THE PARENTS DON’T FEEL PROTECTED! (Ha!) How about the #[email protected]&ing CHILDREN you’re trying to single out and target! pic.twitter.com/ia7oPR0IWe

Republicans lied when they said the Don’t Say Gay law was just about sex ed. Now a Florida school district is banning rainbow attire & telling gay teachers to hide photos of their spouses. It was all about creating a vague law to scare schools with threats of expensive lawsuits.

The public school board in Leon County Florida has decided that a school will notify parents — by form — if a student who is "open about their gender identity" is in a PE class or on an overnight trip. Dafuq? So we are now putting Scarlett letters on children? #ThisIsAmerica

Today, Florida’s “don’t say gay” bill is now law and my school district @OCPSnews has already banned staff from wearing rainbows and talking about their same sex spouses.
Do you think we are going to let this happen without a fight? pic.twitter.com/EVHH4EfaD1

My heart truly breaks for every LGBTQ+ kid who will be hurt in the name of Ron DeSantis gaining power.

I’ll fight until my last breath to unseat these bigots. ??