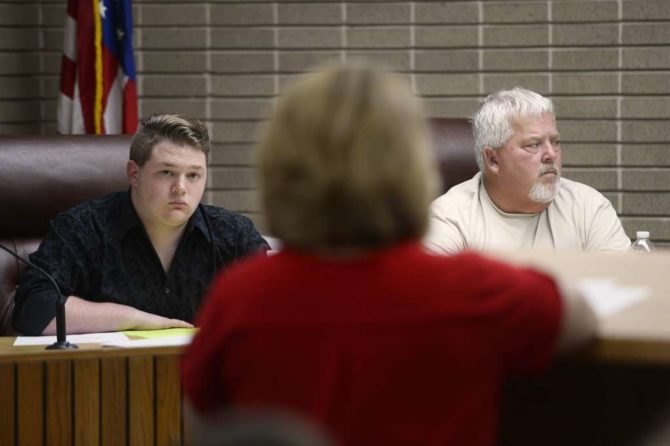 Well, we knew it was only a matter of a time. A formal petition has been filed to remove Groves, Texas city councilman Cross Coburn from office.

His crime? Being gay and having a Grindr profile.

The trouble started back in March after someone leaked 19-year-old Coburn’s private Grindr photos and conversations, sending them to City Hall and a local media outlet along with an anonymous note that said:

On Friday, William Howlett filed the paperwork to try and have Coburn, who was first elected back in February, ousted from office.

Howlett’s petition, which is laced with subtle hints of homophobia, reads:

Thank you to all the members of the Groves City Council. Each one of you has accepted the huge responsibility of making decisions that affect our community, and I’m confident that you all take this responsibility seriously. Unfortunately, one member, Mr. Cross Coburn, has publicly demonstrated actions unbecoming a Public Official, compromising the integrity of his office, and fracturing the trust of the citizens of Groves. Therefore I, William L. Howlett, wish to initiate a recall petition to remove Cross Coburn from the Ward 1 Groves Councilmember position.

The “actions unbecoming a Public Official”, of course, is being an openly gay man with a Grindr profile.

Howlett has 20 days to collect signatures from 10 percent of the city’s registered voters, or about 950 signatures, to have Coburn recalled.

Meanwhile, Coburn has vowed to fight the effort and insists he’s done nothing wrong. And he’s right! He hasn’t. There are absolutely no laws against elected officials having Grindr profiles.

He’s hired a lawyer to help explore his legal options as well and Boston-based political consultant Jonathan Scott to help manage the scandal.

Scott tells a local news outlet the whole thing has been a political attack against a smart young politician who, by no coincidence, happens to be gay.

“We found it unfortunate that a political opponent chose to politicize this in a negative way after an injustice was done against Councilman Coburn,” he said. “Ws far as the petition goes, we are in a holding pattern. There is a lot of detail that needs to be paid attention to when one presses a recall election.”

As for Coburn, he’s not letting the scandal distract it from the job he was elected to do.

“I want to work on fixing our roads and cleaning up debris,” he tells his local TV station. “I plan on getting a group of volunteers together and going on my own to streets and houses that need help and pick up debris left over from this hurricane.”

When asked if he has any plans to resign, Coburn says, simply: “No, I’m not going to.”

Related: City councilman fights back after his raunchy Grindr pics were leaked to City Hall