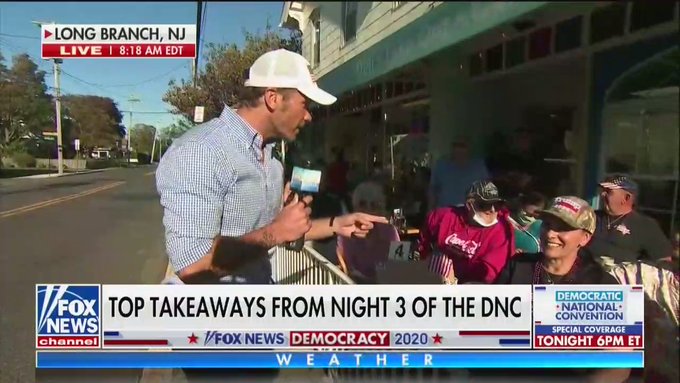 This just in: Coronavirus is over!

Kidding! It’s NOT over. Not in a long shot.

While cases are slightly down from where they were earlier in the summer, last week the U.S. still reported almost 50,000 new ones, with 12 states seeing their average daily numbers rise at least 10% from the previous week, according to CNN.

But you’d never know that if you were watching Fox News this morning when reporter Pete Hegseth swung by a busy diner in New Jersey to question patrons about their reactions to the Democratic National Convention and other issues.

Hegseth, who was not wearing a mask or social-distancing during his report asked one woman for her thoughts about coronavirus and she boldly proclaimed that the “virus is over.”

Fox & Friends platformed a woman who insisted, falsely, that "the virus is over. We need to step away from the fear." (Hegseth didn't push back at all.) pic.twitter.com/Oc3NkzE53r

After introducing the woman as “a nurse who has been on the front lines,” Hegseth asked, “What’s your take right now?”

“That the virus is over,” the woman confidently responded. “We need to step away from the fear, and we need to educate ourselves on how to get healthy.”

Tell that to the thousands of Americans currently sitting on ventilators, lady.

Hegseth interviewed another diner, salon owner Barbara Jones, who said that, as an esthetician, she personally believes we need to “open things up and let people make their own decisions.”

This is stunningly irresponsible pic.twitter.com/1Yb0vcudMq

Back in the studio, Brian Kilmeade responded to the report by saying, “Instead of giving people a chance to have indoor dining, they keep everybody outside, and they just slowly starve the restaurants of the ability to make a living. It’s unbelievable.”