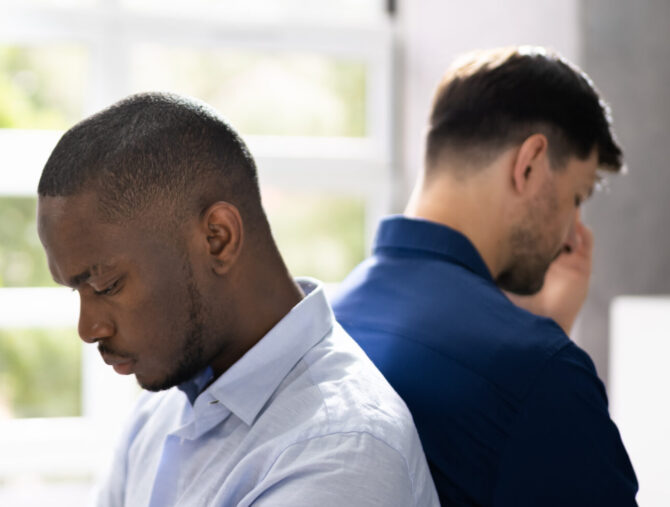 My husband and I were good friends with another couple (I’ll call them Tom and Jerry) who we’d regularly hang out with. We’d do dinners, holidays, even took a few trips together over our 15-year (platonic) friendship. Well, Tom and Jerry recently split and things have gotten awkward. Basically, Tom cheated on Jerry and the divorce has been messy. My husband is Team Tom and wants to stay friends with him. I’m Team Jerry and don’t want to drop him, especially after he just got cheated on. But they’ve both made it clear they aren’t comfortable with either of us being friends with the other. So I feel stuck. I don’t want to have to “choose” a friend. On top of that, I don’t know how I feel about my husband siding with a cheater. I realize this all sounds very petty and immature and maybe even stupid for four guys in their early 40s, but I’m at a total loss for how to navigate this. Help!!

Caught in the Crossfire

Dear Caught in the Crossfire,

Gay men in their 40s being petty? I’ve never heard of such a thing! In all seriousness, whether you’re in your 40s or your 20s, it’s always an awkward situation when friends break up. Suddenly, it feels like there are “sides”, and you don’t know who to pledge your allegiance to. The pressure can be overwhelming. And I can imagine it’s even more confusing when you and your own partner are on opposite sides of the division. In these situations, however, it’s more important than ever to be your own person.

Breakups are usually a complicated picture, and unless you’re in the relationship yourself, it’s really hard to know what the full story is. Even if one partner cheated, and it seems easy to put the blame on him, we don’t always know what his experience in the relationship was. Maybe he felt criticized, didn’t feel safe to express his needs fully, or had his own unprocessed trauma and shame that led him to self-sabotage. Should he have expressed his desires and feelings, instead of betraying his husband? Probably. But, again, it’s so hard to know the full story as outsiders looking in.

Because it’s usually more nuanced than a “good guy” and a “bad guy”, it’s important to have compassion for all involved. Let’s face it, both Tom and Jerry are hurting, and like the cat and mouse cartoon that picks up again every week, no one really wins in the end. I understand your resistance towards being forced to pick a side, and I think you should stand firm in that hesitancy. You were friends with both of them for a reason, and it doesn’t seem fair to lose 50% of the friendship just because Jerry’s ego can’t tolerate it.

As hard as it is to do, you might consider having a separate conversation with both of them, letting them know that while you completely empathize with how they are feeling, and you care about them, you also have a completely separate and independent relationship with their ex. Let them know that you need the respect and freedom to make your own choices on your friendships, and that it’s an unfair position to put you in to demand complete loyalty. If Jerry continues to be upset, that’s on him, and is simply coming from a place of hurt that he may want to work through with an understanding therapist. You may need to remind him more than once, you are not choosing sides here. If he chooses to reject you over this, that’s his loss.

For some people, it can be really difficult to have such an honest conversation, especially when it comes to asserting yourself. If that’s you, it might also help for you to meet with a therapist, to help build up some communication skills, and work on not giving in to people-pleasing.

As for your own husband siding with the “cheater”, this is also his prerogative. Again, everything is complex, and perhaps he sees a different side of the story. Just as you’re allowed to decide your own independent relationship with Tom and Jerry, your man gets to make his own choices, too.

Navigating all this tension isn’t easy, and feelings sometimes get hurt. However, remember to channel your inner Patrick Swayze, “no one puts baby in the corner.” You get to be your own person, and decide for yourself who your friends are, and who your allegiance is to.

Struggling with your own issue or feelings? Reach out to LGBTQ Therapy Space to schedule a free video consultation with an LGBTQ clinician in your state who fully and authentically understands you. And don’t forget to follow us on social for LGBTQ mental health tips, and more!