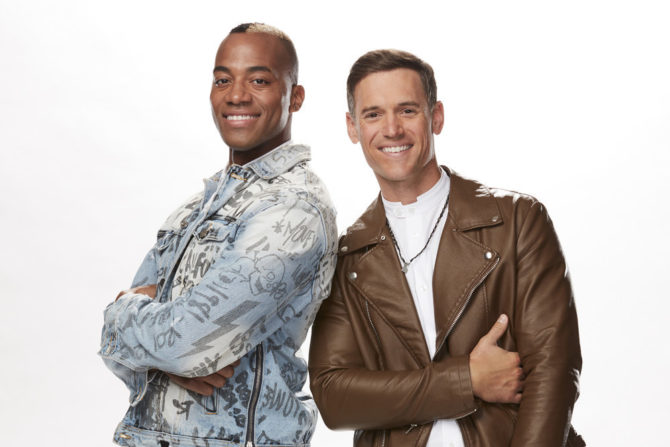 Chances are if you caught last Monday’s episode of The Voice, you’ve been humming The Spinners’ “Could It Be I’m Falling In Love” all week long thanks to a stellar performance by real-life boyfriends Adam Bastian and Jerome Bell. Performing together as OneUp, the only duo this season on the NBC musical competition, the boys wowed coaches Kelly Clarkson, Jennifer Hudson and even Blake Shelton with their sound, and danced their way into the hearts of fans across the country.

The lovely couple even brought Kelly to tears with their heartwarming story of love in a time of where racism and homophobia are running rampant. The story just got better when the men brought their families onto the stage, where they mixed and cheered with a comfort level of diversity that is America’s future, assuming we survive the current era.

But the competition is just getting started. Ahead of this week’s battle rounds (Mondays and Tuesdays 8/7c) Queerty got on the phone with Adam and Jerome to get to know the lovebirds behind OneUp.

How did you meet?
Adam: We met about a year ago on a video shoot for a music video for a vocal group that I sing with called Seventh Ave, in Minneapolis. And actually, Jerome tells this story much better, and I love hearing him tell it.

Jerome: [Laughs] Yeah, about a year ago I got reached out to by a mutual friend of ours to be Adam’s love interest in a music video. He sent me Adam’s picture and was like, “I don’t know if you’ll be ok with this, but this is your love interest.” And I was like, “I think I can manage!” [Laughs] So they flew me to Minneapolis and we met, and within 10 minutes we were in a scene where we were flirting with each other. But for some reason nothing about it was awkward. The chemistry was there from the very beginning.

So the shoot was in Minneapolis. Adam, did you end up moving to New York to be with Jerome?
Adam: No, actually I moved to New York in 2010. That’s kind of what’s amazing about us meeting in the way we did. Our paths had really come close to crossing several times over the last eight or nine years, and we just never happened to meet until last year. I really believe it was perfect timing. If I had met him any sooner—he was in relationships and I was in relationships, so I don’t think anything would have materialized the way that it did so naturally.

When did you start performing as a duo? Whose idea was it? How did you go from boyfriends to collaborators?
Adam: We started singing together just to make Instagram videos. Both of us had been performing for a very long time as solo artists and had been making our living as singers. Actually, the week that we met on that video shoot, we ended up singing a song together that week with that vocal group that I sing with. So we had already made a video, and we love singing together because we have similar approaches musically to singing and to music in general. The video that we made had a really great response. People really seemed to love the sound that we made with each other. So we decided once we moved in together that we would make little Instagram videos. And that’s how The Voice found us. It wasn’t something we were seeking out, we just love singing together. It seems so effortless to work together in that way.

Did you have any hesitation, integrating your relationship and your creative work?
Adam: Not really. I think in the past we both had determined that we didn’t want to date another performer. We both have in the past and it’s difficult. But that never came up, because for some reason it’s so effortless to do this together, and it was undeniable anyway. There was no way we were not going to be singing together, just because it’s what we love to do and we do it so often.

Jerome: A little fun fact: our first time ever performing onstage together was our blind audition for The Voice. So there was a little bit of pressure there! [Laughs] We naturally just had this electric chemistry together. One of the best moments of my life, I think, was walking out onto that stage and looking to my left and seeing Adam standing with me in that same moment.

What was your response to the judges’ reactions? Kelly and Jennifer had really strong reactions in particular. We saw what was happening onstage, but what were you thinking?
Jerome: To be honest it was actually a blur. There are little bits that we can remember, but it was really cool to watch it and see how it unfolded. When [the judges] turned, we didn’t even see it, because we were doing our high note, and we sang the rest of the song together until our bow at the very end. So we had no idea that they had turned because we were so in it. If you look closely, Adam has a little quiver when we’re doing our bows. He got weak in the knees! He was shocked!

Adam: Leading up to that, in some of the interviews with the producer, one of the things that they ask you is, “What does being on The Voice mean to you?” And I think it was evident very early on that we’re there for the music, of course, but the deeper meaning for us is to show an example of love to America—and a big part of America that probably hasn’t been open to seeing it. They’ve never had a gay couple on The Voice, and I know that there are a lot of conservative viewers of this show. So, to have the opportunity to be on that stage and be in front of these people and be open about the love we share for each other and for our music, and being able to share that love through music, was huge. So, when the coaches turned around when Kelly said that about it being a beautiful picture of love in a time when the world is so divisive, she hit the nail on the head. That’s exactly what we were going for. As Jerome said, a lot of it was a blur, but I think that was the moment when I thought, Oh my god, she gets it!

Everybody on that show is so talented, and it’s so easy to just say, This means everything to me. But I just knew, going into it, we had a deeper reason.

I think Jennifer had a block remaining. Were you a little disappointed there wasn’t more of a battle over you?
Adam: [Laughs] I wasn’t disappointed because the nerves and the tension were just so high at that moment. I just wanted someone to choose us!

Do you have an idea of who might be your biggest competition this season?
Jerome: Who would you say, babe?

Adam: I don’t know… It kinda depends on what angle you’re looking at it from. There are male vocalists who can do everything we do with two voices with one voice. I definitely think Sandy Red is a force to be reckoned with. Kimberly Joy, she’s incredible. She’s definitely someone who I think is one of the best in the competition.

Jerome: The thing about this competition is everyone is so different. Everyone has their own unique style, so it’s hard to pin anyone person against the next.

So, you’re both in your mid-30s. Do you ever worry that your ages might be a liability in pop music?
Jerome: I think the music industry has shifted quite a bit in regards to that. There’s a niche for everyone. It just depends on what kind of music you want to do. I wouldn’t say we’ve missed our moment. I think everything happens when it’s supposed to and as long as we continue to stay passionate about it and really go after our dreams…we met a year ago and we could have never predicted that we would be on The Voice. It’s already been a pretty cool year and we haven’t even really dug into it yet.

Yeah, you’re at such an early stage of both your career and your relationship. Do you ever think about the toll that fame could potentially take on you?
Adam: I think the strain that all of that can put on a relationship is so negotiable. It’s all open to how much each person wants to work through any differences, creatively or just personally. So far, what we’ve done together, working together, has brought us closer together. We’ve certainly had a few little arguments, but it’s never anything that’s so deep that it’s not able to be handled. It boils down to communication and the willingness to talk through things. What I love so much about working with him is that he has caused me to work harder and to want to be better. When we met I was so inspired by him. I remember saying this to Jerome, I said, “I’m afraid that being with you is going to make me either have to quit singing or rise to the level you’re on.” I couldn’t be in the middle. When we met I thought I might be hiding in his shadow a little bit. But because Jerome believes in me so much he refused to let me say I wasn’t going to sing anymore. He’s really drawn out a tremendous amount of confidence in me. He drives me to be better.

Tell me about your sound. Do you write your own songs?
Jerome: Yeah, we’re both songwriters as well. We’ve actually started to write together and we’re going to be working with another duo out of New York called Break Out the Crazy. They’re incredible. Basically, the style of music we want to do is going to be pop-soul, for sure. We want to do fun, happy music. Almost 80s retro, like “A Higher Love,” those kinds of songs that just make you happy. We want to keep everything super positive and upbeat.

Adam: It’s funny, the first song we plan to release is an original holiday song, a Christmas song that really addresses the issue of not feeling accepted in your home because of who you are. So the message of our first single is very hopeful, but it’s emotional because most people that have come out as gay have experienced a difficult time with their family, and I think it’s important to address that. But the genre is still pop-soul. It’ll be available this holiday season.