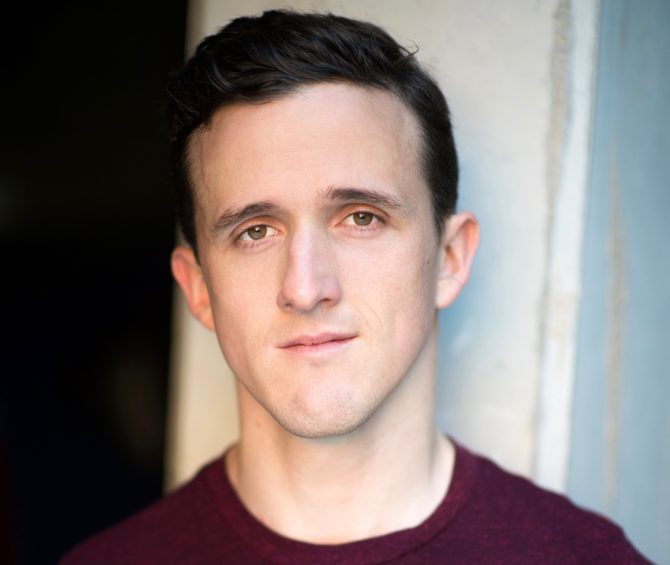 Daniel Monks had always dreamt of being an actor. That is until a physical disability–resulting from a botched biopsy that ultimately left him hemiplegic–put a damper on his dreams. At least, at first.

“I just assumed that now I was disabled, I couldn’t be an actor,” 28-year-old Monks tells Queerty. “In my mind, it was a given that I didn’t even really question.”

It wasn’t until Monks started writing (and eventually starring in) Pulse, a film about Olly, a gay disabled teenage boy whose soul gets transplanted into the body of a beautiful abled woman, that he finally realized perhaps he had a chance in Hollywood after all.

And it is the kind of realization that is paying off for the gay, disabled, Australian actor. Last month, Monks was nominated for Best Lead Actor in a Film at the 2018 Australian Academy of Cinema and Television Arts Awards (the Australian equivalent of the Oscars) for his work in Pulse.

Queerty recently sat down with Monks to discuss the film, what inspired it, and how he went from wishing he could change his disability to ultimately embracing it…

I watched Pulse before Christmas and found it super fascinating! You did a great job. Tell me, what inspired the concept of the film?

I have a physical disability and I am gay, and so it’s probably unsurprising that in a lot of my writing. I’ve been interested in exploring bodies and desires, and specifically how they shape who we are. I acquired my disability at age 11, and after 6 months in hospital, I remember returning to school in a wheelchair, and seeing the boy in my class I had a crush on dating the pretty blonde girl, and I remember thinking that if I just looked like her, he would want to date me, he would want to kiss me, he would want to love me.

I felt so disconnected from my body, it no longer felt like my own, and bodies seemed so arbitrary to me. I personally experienced how completely one’s body could change, and in turn, how differently people responded to me as a disabled person compared to when I was able-bodied. All of this fed into the initial genesis of the story, and was what I wanted to explore.

How much did you draw from your own experiences for the film?

Hugely. Obviously the film has fantastical, sci-fi elements, so it is in no way an autobiography, but the emotional journey of the lead character very much mirrors my own personal journey of accepting and embracing my disability, my sexuality and myself. The film took many years of incredibly hard work to make, but what fueled me throughout the entire process was imagining other queer disabled youth seeing it.

I never saw disabled stories growing up that helped me to combat my internalized ableism. I felt completely isolated in my struggles as a young disabled person, and it wasn’t until my early twenties, when I was able to connect with the disability community, that I was able to confront the ableism I had internalized, and in turn, find pride in my disability.

Pulse is the film I wish I could’ve seen when I was a teenager. Our society is so inherently ableist, and I feel it is a revolutionary act to love my disability, and so sharing my journey of how I came to that place felt like an important story to tell.

Was it difficult writing and filming things (such as being disabled) that hit so close to home?

It was emotional and vulnerable because it was so personal, but all of my favorite performances and stories are vulnerable and personal to the actors and writers of the work. I feel like that creates the most interesting, honest work… It was very important to myself and our extraordinary director, Stevie Cruz-Martin that we not censor or dilute any element of the story, that we be courageous enough to unflinchingly tell the truth. 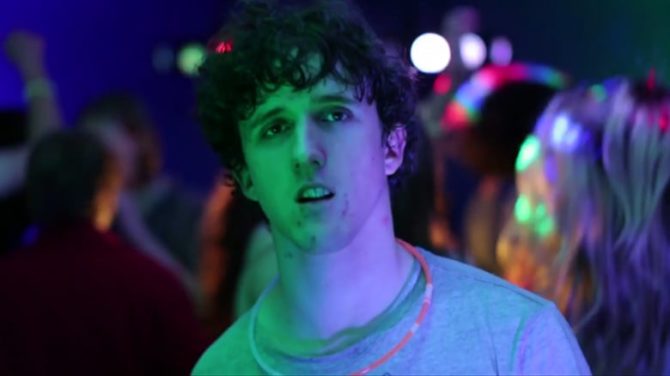 I thought it was interesting, if a bit unexpected, that your character ultimately swaps bodies with an able-bodied female. What inspired that choice, and was there ever any discussion of having him swap bodies with another guy or disabled guy?

As with most teenagers, I found at that time that anything that was deemed “different” about myself I wanted to change so as to be “normal.” Growing up in a culture and society which is predominantly homophobic and ableist, I had internalized so much self-hatred for my disability and my sexuality as a young teenager.

I remember I had two secrets that I thought that I would take to my grave: one was that I was gay, the other was that I had to use diapers. I would go to sleep each night wishing with every fiber of my being that I would wake the next morning and those things about myself would be changed. And I also truly didn’t know if I could ever be desired or wanted or loved romantically and sexually as a disabled person. As a teenager, I felt like I could never be loved for who I was, and so the concept of the film came directly out of that.

My character Olly wants to change into the body of a beautiful abled woman, not because that is who he feels himself to be, but because he feels the only way he could be loved is if he were not himself. The film explores how much we try to change or censor or dilute or sell ourselves in order to be loved, which is ultimately futile, [because] for us to be truly loved, we need to allow ourselves to be truly seen by our partner, flaws and all. The film’s ultimate message is very similar to RuPaul’s catchphrase: “If you can’t love yourself, how in the hell you gonna love somebody else?”

I read in another interview that you didn’t think you could be an actor after becoming disabled. Why did you think that?

Because I didn’t see any disabled actors. I didn’t see any actors, or even public figures, who looked like me. Representation is so vital. It not only influences how we as a society see a minority, it impacts how that minority sees themselves, and sees their worth within the society. I just assumed that now I was disabled, I couldn’t be an actor.

It was only when I was developing this film, with a lead character based on me, that I considered acting again, which was ultimately one of the best decisions of my life. Out of the entire process of making this film, the acting of it was the most rewarding for me, and has meant that I can now hopefully have a career as an actor.

I knew though that it was going to be much more difficult, and that I was going to have to work twice as hard to get half the opportunities of my abled peers, but something that motivates me is knowing that if I am able to have any success as an actor, it can hopefully have a greater impact [beyond myself]. It could help break down barriers to make it easier for the next generation of disabled actors and filmmakers, and be part of providing much needed representation.

What is your relationship like with your disability and sexuality today? Have you always been comfortable with the two or… ?

[Laughs] I definitely haven’t always been comfortable with the two, as my film can attest to. But today, instead of being ashamed of them, I find so much pride in them. I feel like I am a kinder, richer, more empathetic human and actor because of my disability and sexuality. And I also feel like as a storyteller, I have something to offer. Disabled stories in particular haven’t been told authentically by disabled people, they’ve almost always been told through an abled gaze, and so I feel like I have new stories to tell that have not yet been told. 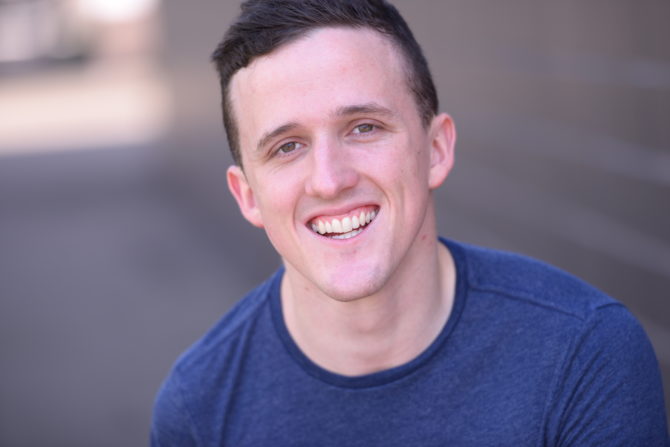 How has it been navigating the entertainment industry with your disability?

These attitudinal barriers are the greatest challenges I’ve had to overcome to have a career as an actor. My physical disability in no way prevents my ability to act, or act well. My disability is not something I have ever had to “overcome” in order to do what I love. I’ve just had to overcome what people in the industry believed I could do, or how I could be cast.

This is why when more disabled actors get the opportunity to work, and have their work be seen, I hope it’ll change the industry and audience’s perception of us and what we are capable of, and break down some of those attitudinal barriers.

You’ve now been nominated for an Australian Academy of Cinema and Television Arts Awards alongside some big names. How does that feel?

Absolutely extraordinary. This year has been the dreamiest of dreams. To be nominated for Best Lead Actor in a Film at the AACTAs (the Australian equivalent of the Oscars) for my debut feature film, in the same year I was nominated for Best Lead Actor in a Play at the Helpmann Awards (the Australian equivalent of the Tonys) for my mainstage theatre debut is beyond my wildest dreams. It also feels hugely reassuring that I can live my dream and hopefully have a rich, sustainable career as an actor.

What’s next for you? Any chance we’ll see you in the U.S. soon?

I’ve been splitting my time between London and Sydney, and have a number of exciting projects coming up in 2019. I’ll be starring in “Lord of the Flies” at Sydney Theatre Company with Mia Wasikowska in July and August. [As for seeing me in the U.S.], my favorite place on Earth is New York City, and I have dreams to live and work there, so I really hope so!