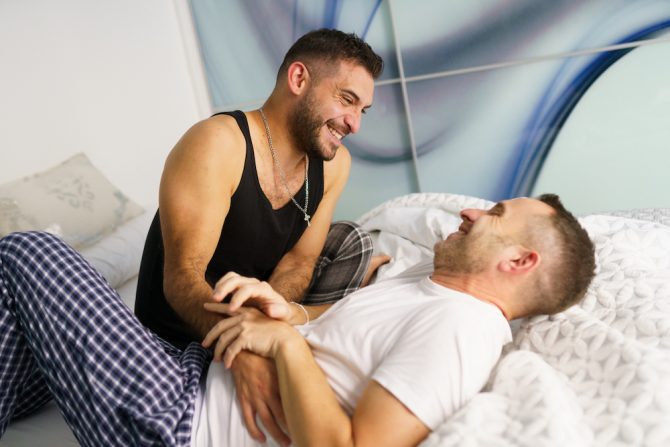 Sounds like a lot of guys have gotten their passports stamped, if you know what we mean. Reddit users in the r/askgaybros subreddit chimed in with more than 180 comments after one person asked, “Have you ever hooked up with a guy where the two of you didn’t speak the same language at all?”

From a barstool encounter in Mexico to an airport-lounge hookup in Munich, here are some of the best, hottest, and goofiest anecdotes from the thread.

“Yup. I spoke no Georgian, and he spoke no English or any of the other languages I speak. Got the full-on Georgian cultural immersion with a good f*ck surrounded by Orthodox Christian images on every wall in that room.”

“I did, with a French guy once, and it was really sweet. We met in a club, and somehow I worked up the courage to go ‘talk’ to him—thanks, haircut!—and then he got hungry, so we went to get him some snacks. Then we started walking under the moonlight on empty streets and stopped to sit under a bridge and made out. Brought him back to mine later, and we played around a bit and then cuddled and went to sleep. He was really, really cute. This kind of thing never happens to me, and that will always be a nice memory to have.”

Related: Ten sexy men from across the globe to whet your appetite for a return to travel

“Yes, I met a guy online from Germany, and he came out and stayed with me for a week. I had to try and remember the two German classes I took in high school. What I didn’t know, he taught me. And most of the time, we really didn’t need to speak. Grunting and moaning was more like it.”

“At the end of a wild night, I ended up taking this guy home from a gay club in my car. He had just kind of attached himself to me like some lost puppy dog. We hooked up, and he spent the night. Next morning, we realized that I didn’t speak Spanish, and he didn’t speak English. But I had to get him home somehow, so he had to give me directions by pointing. Hooray for sign language.”

“Yes, I hooked up with a Japanese guy. Best f*ck of my life.”

“Quite a few times. The animal part of the brain just takes over, and it’s easy to communicate affection.”

“Yes… in a public restroom. He was Asian … and we didn’t require words, only gestures. And I mean, who doesn’t know how to gesture for a BJ?”

“Frequently. It’s honestly great to cut through the bullsh*t. A little Google Translate, a few meaningful sentences, and you’re off.”

“He’s French traveling in Thailand. I am Malaysian with fluent English. I hop on my rented scooter in the night, ditching my friends in the hostel to meet up with him.”

“Portuguese guy. I went over to his house, we’d been chatting on Grindr in Portuguese. I know some Portuguese, but I didn’t understand this guy’s accent at all. I literally couldn’t understand a word he said. In the bedroom, he said something to me. I asked him to repeat. He said it again. I asked him to repeat again. He got a little annoyed and turned the light off. I realized he’d been asking me if I wanted the light on or off.”

“South Korean powerlifter after a meet. Next to no English. He was fifty pounds heavier but six inches shorter than me, a real fireplug. Got plowed relentlessly. Dick is the universal language.”

“My ex and I. He is Catalan, and I am American, we were living in Barcelona. We spoke Spanish and English together, but every time we would smoke marijuana, both of our language skills would go out the door. We’d end up just sitting there laughing and cuddling because all of a sudden, we couldn’t communicate with each other, lol.”

Related: Mexico City is one of the gayest cities on the planet. Here’s how to take it all in.

“Once did the deed inside of a Mexican restaurant where the guy was working. He caught me walking on the sidewalk and invited me—I almost said no. It was closed, but based off how he acted, I don’t think he would’ve care if it were open. We didn’t speak the same language, but I just got bent over a bar stool and y’know…”

“I hooked up with a French guy who kept shouting ‘bon bon’ and I finally figured out he was saying ‘good good.’ I still crack up remembering that. Hot time, too.”

“One memorable occasion happened in a sleeping pod in the Lufthansa first class lounge in Munich with a Thai executive whom I found on Grindr, both of us obviously using Google Translate to speed things along. The funniest moment being Google Translate asking me to ‘liquify inside him.’”

“Yes, I once hooked up with an Australian. Couldn’t understand a word.”