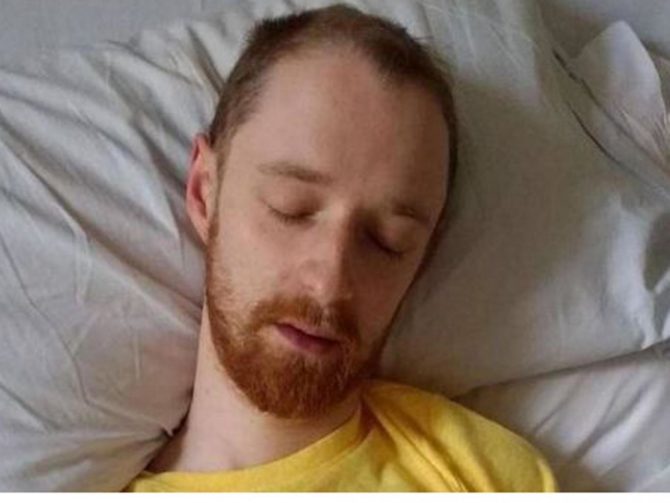 A gay British man was found “curled up in a ball” and left for dead after sustaining serious injuries at the hands of thugs.

Carl Johnson, 25, had recently moved to Rochdale, Greater Manchester after landing a job there. He went out Saturday night to a local pub to make new friends, his family say.

While walking home from the pub early Sunday morning, a group of three men and one woman jumped him and began to viciously beat him. Some of the attack is thought to have been captured on security cameras, although the video isn’t enough to ID the suspects.

Carl’s skull was fractured and his brain was bleeding, doctors say. They also say it was a miracle he didn’t die.

The Independent reports that Carl’s brother Mark believes the attack was a hate crime.

Carl remains hospitalized as he slips in and out of consciousness, and faces a recovery expected to last six months.

Police are currently searching for the identities of the suspects, hoping to find a witness who saw the attack.

Mark told The Independent: “He had just moved to Rochdale and went out to make friends because he has none. He had met some people in the pub. Then outside he was attacked down the road.”

“He had to curl up into a ball,” Mark added. “Had they hit him a bit harder they would have killed him.”

“He’s no fighter. A gust of wind would blow him over.”

Mark has started a Facebook campaign to assist in the search for the culprits, hoping a witness will come forward with information that could help police.

“I’m in a desperate bid to get the people who did this into custody. I have a lot of people on Facebook from over the years. So it’s been quite successful in getting profile.

“We’re hoping on the goodwill and the humanity of people that something will come out of it.”