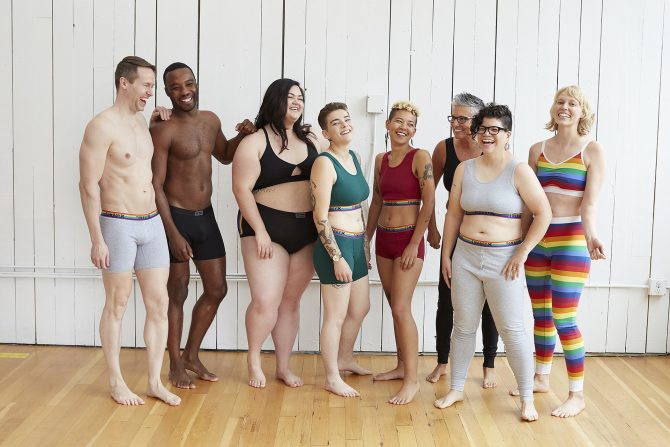 Rainbow-themed laptop skins. Rainbow-themed sparkling water. Rainbow-themed mouthwash. It seems no matter where you look, scroll, or shop, there is no shortage of Pride-themed gear to get you through the month of June. But nothing shines quite so bright as TomboyX, a Seattle-based clothing company specializing in inclusive, gender neutral underwear.

The company prides itself on selling clothing for all bodies, regardless of where they fall on the size or gender spectrum. From underwear to swimwear, TomboyX offers options from XS to 4X, with plans to offer even more sizes in the future.

And make no mistake, TomboyX isn’t here to cater to the queer community for one month only, according to its cofounder, Fran Dunaway. Pride has always been a central part of the company, and continues to be so, she says.

“We aren’t doing this to jump on a trend or a fad,” Dunaway tells Queerty regarding the company’s emphasis on the LGBTQ+ community, body positivity and inclusivity. “We have been here a long time. We are gay owned and operated, so it’s personal to us. It really matters to us in a way that is just part of our DNA.”

Launched in 2013, TomboyX was founded by Dunaway and her wife, Naomi Gonzalez. The dynamic duo came up with the idea for the company after Dunaway had been struggling to find a button-down shirt to her liking, and discovered there wasn’t much out there for women looking for masculine-style clothing.

It was then that TomboyX was born. Dunaway and Gonzalez started with the usuals: shoes, shirts, belts, and hats. It wasn’t until someone called Gonzalez, asking if they had boxer briefs for women, that TomboyX had their ‘a-ha’ moment: Gonzalez did a quick online search for such briefs, only to find Spanx. Seeing a gap in the market, the couple soon discovered they were onto something great. As soon as they started selling underwear, Tomboy X’s revenue tripled in six months, and has been growing ever since.

“It’s pretty remarkable, and at times overwhelming,” Dunaway says. “We’ve gotten much busier with many more people. The stakes are higher, but at the same time, we are in awe of how far we have come in such an incredibly short amount of time.”

No matter their growth and items available, there is no denying that TomboyX is providing much more than underwear. It’s providing a platform for people to feel comfortable in their skin, regardless of gender, sexuality, or identity.

The daughter of a worship pastor father, and missionary mother, Montoya says religion was an integral part of her upbringing on a small farm in Idaho.

“Religion was my entire identity,” she says. “God came first, and I was second.”

At the same time, it caused her great shame. “I truly hated myself,” she says. “I thought I was disgusting. I didn’t have the language for my own identity, or what being trans was. I didn’t see a future for myself, and would pray for God to change me.”

Eventually, Montoya says she “gradually” found acceptance in herself after going to college and reading books on gender and feminism, as well as taking part in the local drag scene.

She came out as trans in 2015, and got involved with TomboyX two years later. It is a company that Montoya is honored to be a part of, she says.

“I love that TomboyX is putting trans people at the front,” she says. “I grew up without seeing myself represented, and because of that, I felt alone and isolated.” By giving a voice to the trans community, and letting folks know it is okay to be exactly who you are, “brands like TomboyX are literally saving lives,” Montoya says.

Chey Packard, who identifies as non-binary, black, and trans – and who was also featured in TomboyX’s Pride video – shares similar thoughts. They discovered TomboyX while scrolling through Instagram a couple years ago, and found the brand a refreshing alternative to other underwear companies. “They aren’t Victoria’s Secret,” they said. “Their focus is not on the genital, but on the body, and making sure [their products] are comfortable for all bodies.”

For Dunaway, giving a spotlight to the marginalized, like Montoya and Packard, is a no-brainer, and is part of TomboyX’s business model. “To me, business is personal,” she says. “This is our brand, this is our company, and we are unapologetic about what we stand for and what we represent. We own it.”

And with Pride Month in full swing, Dunaway could not be more excited, and hopes to “fill the beaches” and everywhere in between with their latest rainbow-driven collection.

“Pride really is about community and is ultimately a time to celebrate and get unapologetic about who you are,” she says. “One of the people in our Pride video says, ‘we’ll turn a riot into a rainbow’ and I think that is absolutely beautiful… Pride is not about you, it’s not about me. It’s about us, and we want people to really celebrate that.”