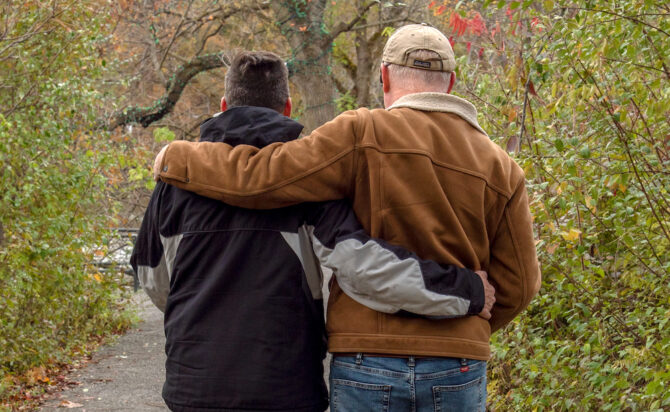 Asexuality is a very real thing, as we all know by now. But as you’ll see below, gay couples opt not to have sex for any number of reasons.

In Reddit’s r/AskGayMen forum, one user recently asked, “Have any of you had a completely non-sexual relationship? Like, of course there’s intimacy, but never actual sex? Just curious. Coming from a virgin, by the way.”

Here are excerpts from that conversation…

Showing love in other ways

“I’m in one now, but not of my own choosing. I have a lung disease which can be controlled but not cured. Eventually, it is going to kill me. (It’ll be a few years before that happens.) I take 13 medications a day so I can breathe. Now, if I don’t take the medications, I can have all the sex I want—but I’ll also struggle to breathe, and my chest is going to feel like something is crawling around inside my lungs, and breathing is going to feel like I’m trying to drag air through a wet sponge. Having sex when you’re struggling to breathe is no fun. If I take the medications, it’s far easier to breathe, but I can wave goodbye to my sex drive. There are other ways I can show love besides sex. I love to cook, and I’m pretty darned good at it. I’m older than my partner and retired, so I can fix some really nice and fairly elaborate meals for my partner. (Think: Like Water For Chocolate, where Tita transmogrifies her emotions into food.) I’m also good at fixing problems which come our way and getting them resolved so he doesn’t have to worry about them. That’s a way I can show love. Would I like to have sex? Sure. Thing is, I like breathing. Breathing is good. I’m a much happier camper with air going in and out of my lungs.”

Related: Aesthetic attraction: What is it? And how does it affect your dating life?

“[I’m] in a 1.5-year relationship with another top. It’s been hard, and we are considering opening the relationship for just sex with a bottom occasionally to feel satisfied.”

“I’m in one as I type this. We’re long-distance, and it works for us. We still have intimacy as much as we can have from different continents, but I honestly don’t mind it.”

Not comfortable going all the way

Related: This DC Comics character just came out as asexual

Loving him more than loving sex

“My best friend (also my ex now) and I had a non-sexual relationship. We did have sex once or twice before we started dating until he realized he was asexual and it wasn’t his thing. It was totally fine, we still had romantically intimate moments, we just didn’t f*ck. I loved him more than I loved having sex, so it wasn’t an issue for me. He later ended our relationship because he realized he was aromantic, too. We’re still great friends, as we ended on good terms.”

“Yeah, he was very sickly [with a] genetic condition. Over time, sex was just not something he could manage really due to fatigue and pain. I was, at the time, celibate for religious reasons. It was a deeply romantically, passionate, loving, but short relationship, due to him passing away. I would consider him my first boyfriend and male love now that I think about [it].”

round the bend
13 comments