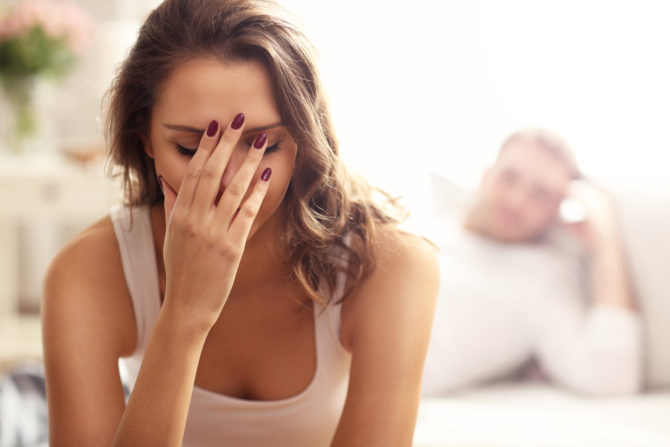 A 27-year-old woman heard a shocking rumor about her 28-year-old husband and now she’s not sure what to do or say or think or feel, so she’s turning to Reddit for answers.

“I consider myself a non-homophobic straight woman,” the woman writes. “I got married a few years back and been with my husband a total of five years.”

Things have been going great, she says, except for one thing…

I recently heard through his best friend that back in college before we were together he apparently got drunk invited an openly gay man to the bathroom and was the bottom in a gay encounter. His bi best guy friend (not the one who told me about this) apparently was in the room and pleasured himself to the whole encounter. His best friend (guy who told me) didn’t witness it but was told about it by the gay guy. His best friend questioned the bi guy in the corner and he confirmed the story was true.

Now the woman wonders, “Could the whole story be made up? Obviously it’s possible but it just seems odd that two people would just…make this up. There has to be some truth to it.”

Related: What do you do when you accidentally hookup with your mom’s gay best friend?

Is he hiding it because he is ashamed? Is he hiding it because he is actually bi or even gay and our whole relationship is me pretty much being a beard? He doesn’t act homophobic. Maybe he doesn’t even remember it? Could I trigger some sort of issues if he doesn’t remember it? … Should I just f*ck off and think the past is the past and this is none of my business? If he is bi I would accept that I just want honesty. I don’t know what to do or how to handle this.

Luckily, her fellow Redditors have lots of opinions on what she should do…

“I mean… does it matter?” one person writes. “He had one drunken night of gay sex in college. … Let it go.”

“Should I just f*ck off and think the past is the past and this is none of my business?” another person adds. “Yes.”

“I mean, like, I don’t understand what the point of trying to urge an answer out of him,” a third person says. “I actually think it’s best for your relationship if you just drop it.”

Someone else questions the woman’s motives in wanting to confront her husband about his past:

Think about what your end game is with this. Are you looking for some kind of ‘gotcha’ moment? Because that’s what it sounds like.

Another person suggests that maybe the reason he never mentioned anything about it to her before was because he didn’t think it mattered:

Some people just flat out do not care. You don’t have to recall every encounter in your life, brief or otherwise, to your partner before you marry them so long as it isn’t going to interrupt your lives in any foreseeable way. If he had a love child with a ONS that he never sees, that’s one thing. Boinking some dude ages ago? Meh.

How do you think this woman should handle the situation? Should she confront her husband about the rumors or just let it go? Share your thoughts in the comments section…