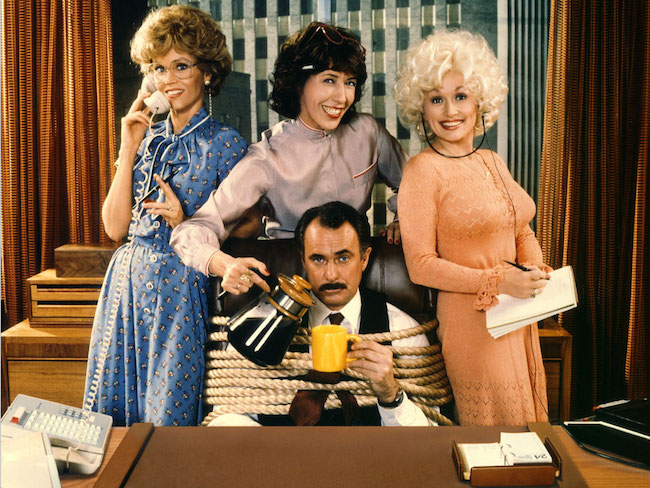 Imagine, if you will, a world in which Lily Tomlin didn’t star in 9 to 5. It’s a cold, dark, clammy place, and it would’ve been reality if Jane Fonda hadn’t shaken some sense into the comedian before an irreversible mistake was made.

On Monday, Tomlin and Fonda stopped by The Late Show with Stephen Colbert to promote the third season of Grace and Frankie on Netflix, and the conversation quickly turned to the classic 1980 feminist comedy.

Related: Lily Tomlin Knows Just What To Do With Donald Trump

Turns out Tomlin wanted to split only one week into production.

According to Fonda, 9 to 5‘s co-star and co-producer, it took a whole year to get Tomlin and Parton to commit to the project:

“We started off a very dark comedy. And then one night I went to see Lily in her one woman show, Appearing Nightly. And what can I say — I was smitten. I said, ‘I don’t want to make a movie about secretaries unless she’s in it.’

And then on the way home I turned off the radio and Dolly Parton was singing ‘Two Doors Down’ and I thought, ‘Oh my, imagine if Dolly Parton played a secretary!’ I mean, you couldn’t see her hands… And I said, ‘In order to get them, I got to turn it into a real comedy.’ ”

Tomlin had her doubts.

Related: Lily Tomlin On Why Grace And Frankie Isn’t A Comedy, How It’s Like AbFab And The New Generation Of Female Comics

“I didn’t want to do a cheap comedy,” she tells Colbert. “I was looking for something more serious. And then I had to persuade her that I wasn’t the right person for her.”

After Tomlin saw the dailies, “she asked my producing partner to let her go and she’d give the week’s money back,” says Fonda.

“I saw myself on screen in the dailies and I was talking to the birds that weren’t there and I was not doing a good job. And I thought, ‘Oh I’m going to be horrible in this.’ It was only my third movie!”

Ultimately, she changed her mind.

Ever since then, Fonda does damage control to keep the working relationship intact.

“I watch all the dailies for Grace and Frankie and then I report to her,” Fonda says.